After removing the mirror from my master bathroom, I wanted to repurpose it into some cool projects.  No idea what cool projects I was going to make with that large mirror but I’m too much of a treasure hunter NOT to do something with it. My first attempt was a complete failure.  My straight edge moved so my scored line wasn’t straight.  That resulted in a …well, not a clean break.  In addition to not having clamped down my straight edge, my scoring tool sucked.  I bought a new one and tried again — with great success.  Here are some important things I learned about how to cut a mirror. 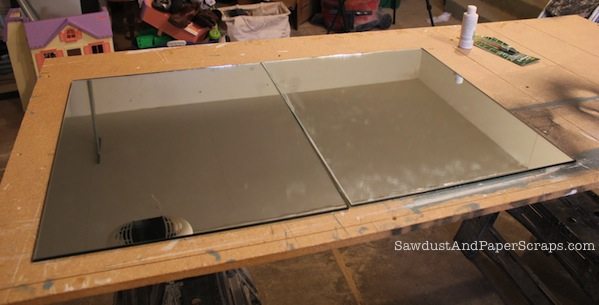 1.  All scoring tools are not equal.  I first used one that I bought at the local home improvement store.  They only had 1 to choose from.  It did not work worth a lick.  Don’t buy that one. 9It had 6 tiny scoring blades on a wheel.) 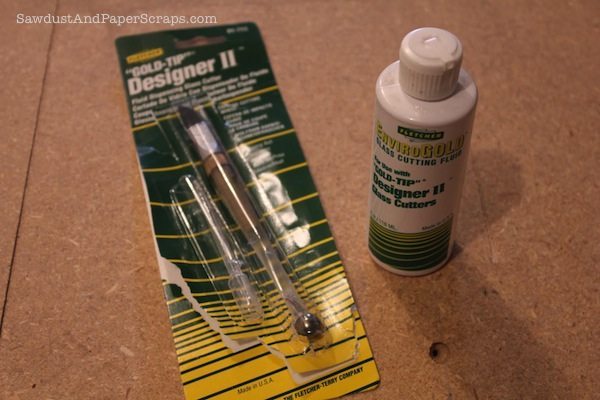 The new glass cutter I bought has one cutting wheel and a cavity in the handle for oil.
I bought mine on Amazon.  The tool was $20, which is high compared to some. But I tried the $5 option the first time and it sucked so I spent a bit more and got one that had a chance of actually working!  (It had good reviews.)

2.  You need oil.  Either on the mirror or on the scoring wheel or both.  I think you can use any kind of oil, sewing machine, cooking…not sure.  I just bought the oil that was in the, “often purchased with…” area when I put the scoring tool in my Amazon shopping cart.

You don’t actually cut glass and mirrors. Mirrors break. I am now going to give you a pathetic attempt at a sciency explanation of why. Glass is a solid liquid. When you score the glass it disturbs the surface allowing you to separate the two sides of that line.  After you score, can make a clean break right down that score line.

We’re just going to keep calling it “cutting” because that’s easier than saying, “scoring and breaking”.

How to cut a mirror

Wear safety glasses.  When the mirror breaks, you don’t want little pieces of glass flying into your eyes.  I don’t suggest gloves for the scoring part because it’s difficult to hold the scoring tool when wearing gloves.  You can put gloves on before you snap the mirror.

I personally like the quick snapping technique.  Especially with a large mirror. The most important thing to remember is to use ONE CONTINUOUS, evenly pressured score all the way from the beginning of your mirror OFF the opposite end!

That is all there is to knowing how to cut a mirror.

« How to Build a Wood Floor Countertop
We’re Heeeeeereee! »