Hanging my Chippy Paint barn door this week felt monumental!  Perhaps because it was unnecessarily difficult on account of the instructions for the hardware lacking in the department of actually instructing, but I figured it out and made it happen. 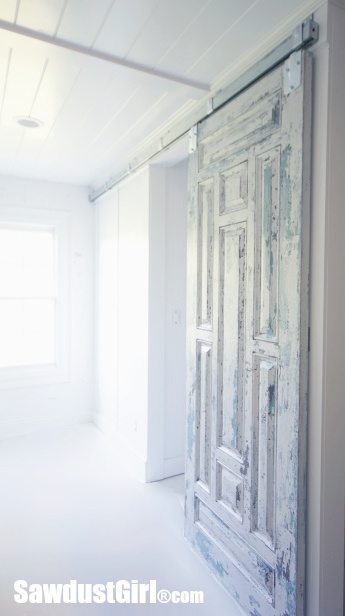 It’s funny that I ended up with the chippy paint finish on my “barn door” because I changed design directions three times before I ended up right where I began in wanting a door that looked like it had about 100 years of paint layers flaking off and exposing all the different color choices that had been made over the years as well as some of the original wood.  It was a fun process to create this “old look” in a used but newish door.

I was originally going to build a door using plywood and 1×4 furring strips, finishing it with wax like I did my distressed picture ledge.  Well, I was originally going to build some kind of vented door which I wanted to finish with chippy paint and make it look like a super old door I might have found in a ditch at the end of a dark alley.  Then I found out (from my heat and air company that were out for my annual spring tune up) that I don’t need a vented door for this closet because it’s not a gas furnace and there is no combustible air flow consideration to be considered.

My next plan was to go the route of the distressed pine like my picture ledge.  THEN I remembered a door I purchased at my local lumber yard last year when they were having a “sidewalk sale” and clearing out some old inventory.  I’ve tried to kick that habit of buying what I don’t need because it’s a good deal and I might be able to use it someday but I slipped on that particular day.  This door happened to be the exact width I needed and I was able to cut it down to make it the appropriate length so I decided I HAD to use it. 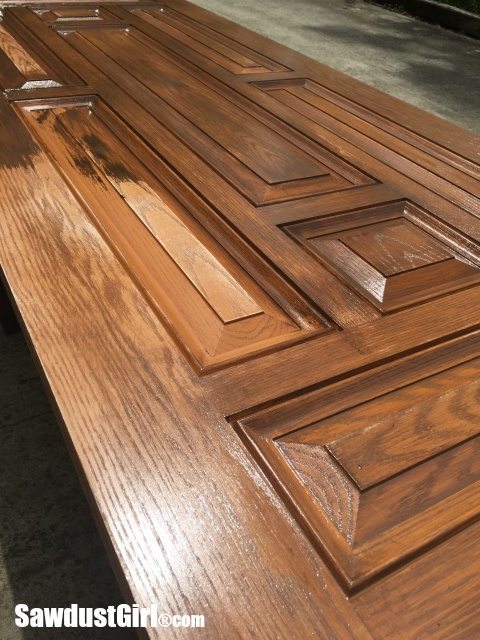 I used some gel stain to cover up the orange-y red oak finish.  This door has about 1/8″ layers of textured fiberglass on the outside and is filled with expandable foam.  It has indented graining but it’s not wood and doesn’t take traditional stain.  I thought I’d try to mimic the look of my faux beam picture rail wax finish with gel stain but could tell early on that it wasn’t going to pan out. 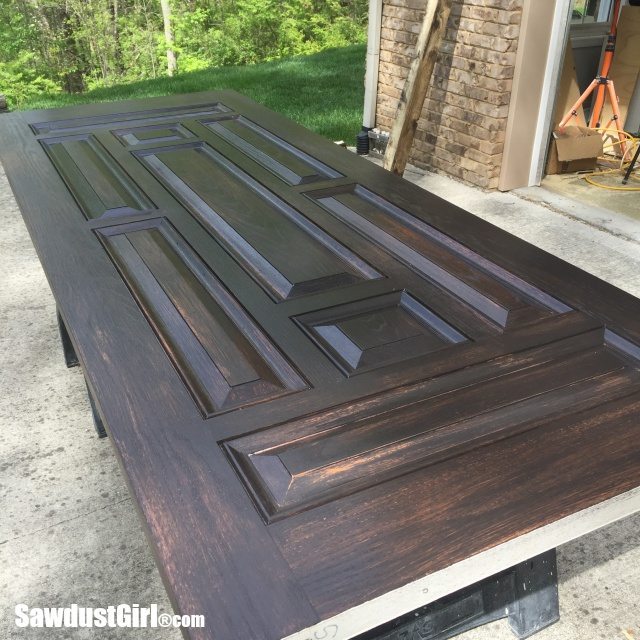 One other design consideration had been a brightly painted barn door.  I loved the idea of a bright pop of color but I didn’t want my barn door to have that much of a center stage in the craft room area of my studio so decided to go back to my original plan of a chippy paint finish. 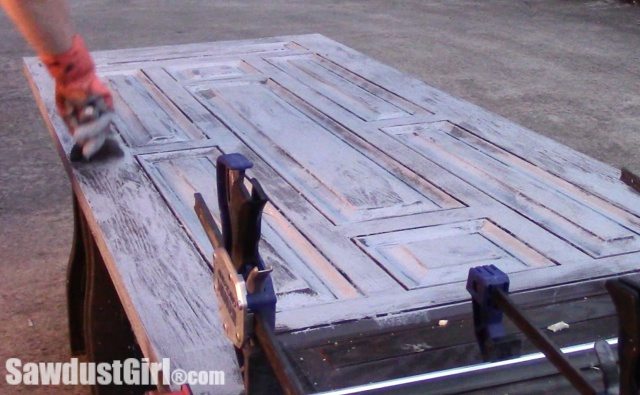 I had a little sample of Miss Mustard Seed’s Milk Paint in Shutter Gray that I wanted to try out.  I painted it on, thicker in some areas, thinner in others.  Then I scraped it off in some areas to make the application even more inconsistent.  This milk paint is meant to chip and flake and there’s no real way to predict how much or where it will do so. 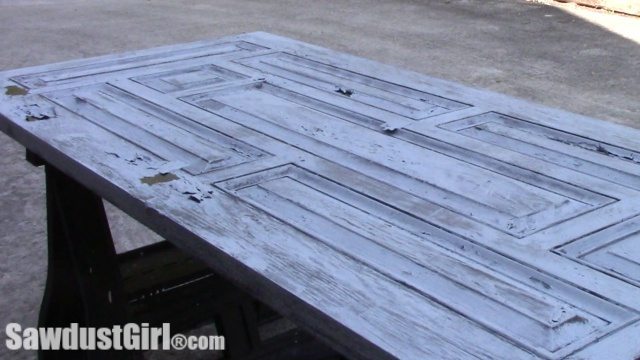 I brushed off the flakes, scraped off more paint in a few areas which exposed the dark stain I previously applied.  I sanded down through the dark stain in a couple areas exposing the original orangey color.  I think the door looks pretty cool with just this one color of chippy paint.  I could certainly have stopped here but I wanted my door to look like it had decades of layers of chippy paint. 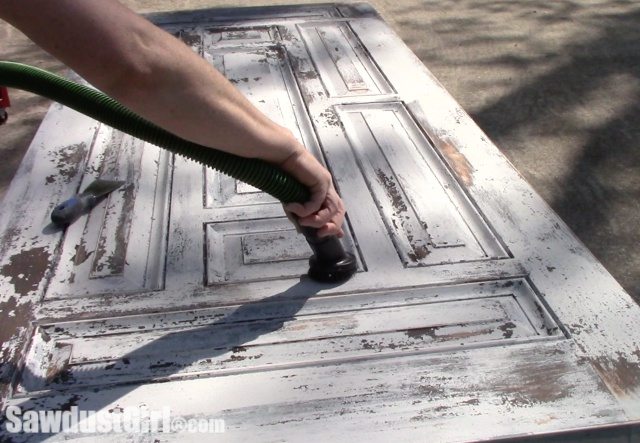 I applied another uneven layer of Miss Mustard Seed’s Milk Paint, this time Kitchen Scale which is greenish blue.  I put it on thin and only here and there. 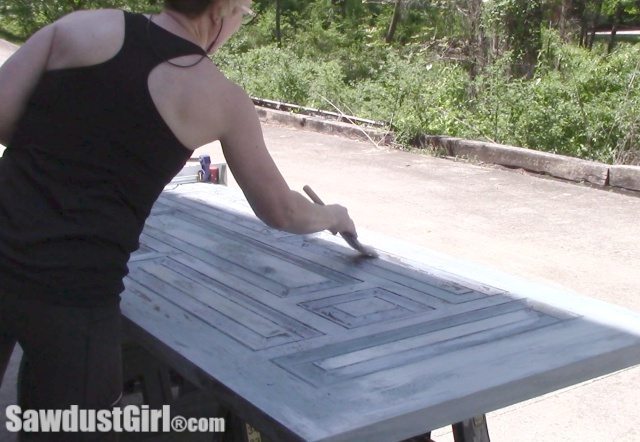 I let it dry and then scraped it again exposing some of the initial gray/white and some of the wood.  (The clamps are me attaching a strip of wood to the top after trimming the door down.) 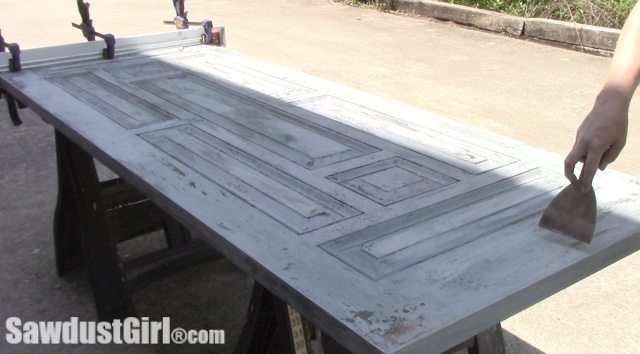 Next I used some latex paint in Light French Grey (Sherwin Williams) but before I painted on the latex paint I applied some globs of paste wax.  I patted it on in random areas. 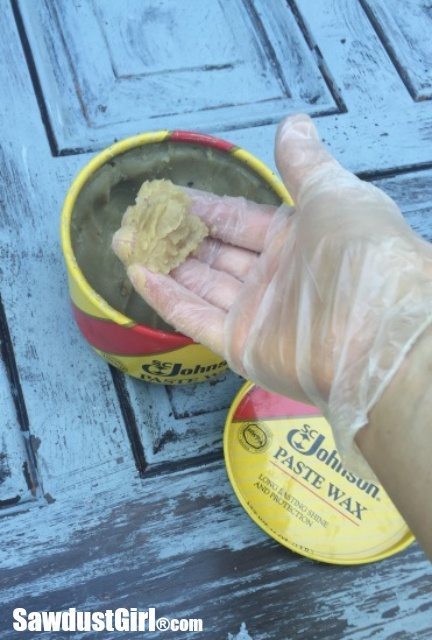 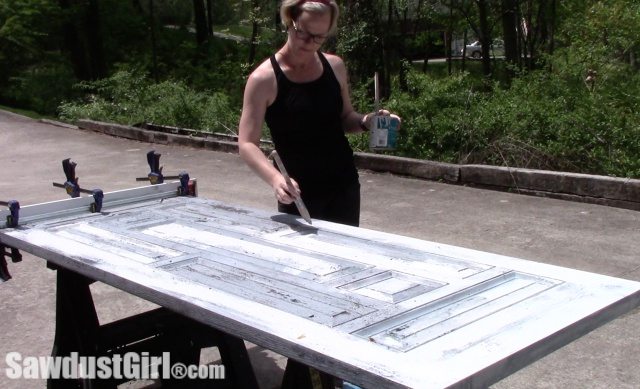 I brushed on a sloppy coat of Light French Grey followed by a patchy coat of Argus (Also Sherwin Williams latex paint).  I allowed the Argus to dry to the touch then scraped up patches of paint randomly all over the door.  Some areas I scraped all the way to the wood.  Other areas I scraped off only one or two layers of paint. 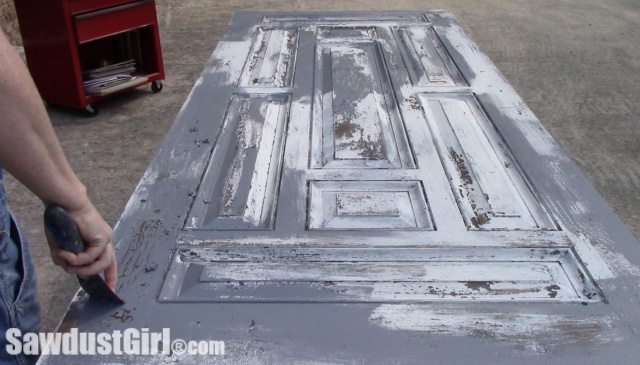 I keep applying patchy coat after coat of the three different grey colors, scraping in between randomly.  Sometimes I would clean off the scrapings but other times I would leave globs and flakes of paint laying on the door and let them dry. 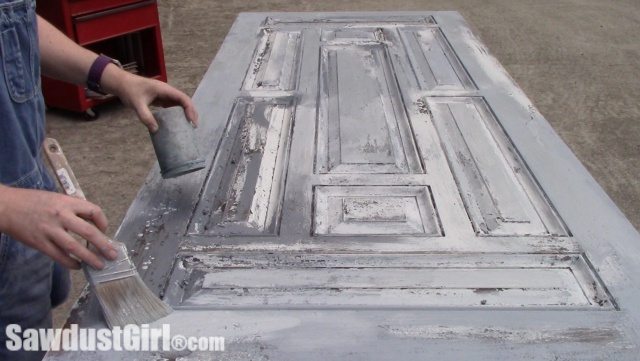 I kept patting globs of wax here and there in between coats of paint.  The wax prevents the paint from sticking so the paint peels off in those areas.  I brushed the paint on in the sloppiest paint job I could do because the sloppier the paint went on, the cooler it looked when I scraped it partially back off. 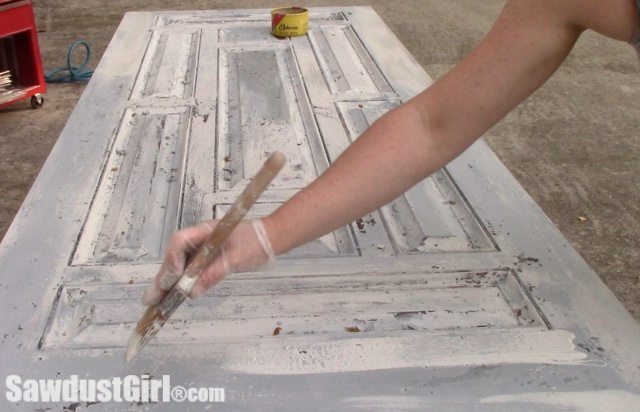 Periodically I used an electric sander to get down to the original dark stain or bare wood in random areas and then I’d repeat the paint and scrape steps. 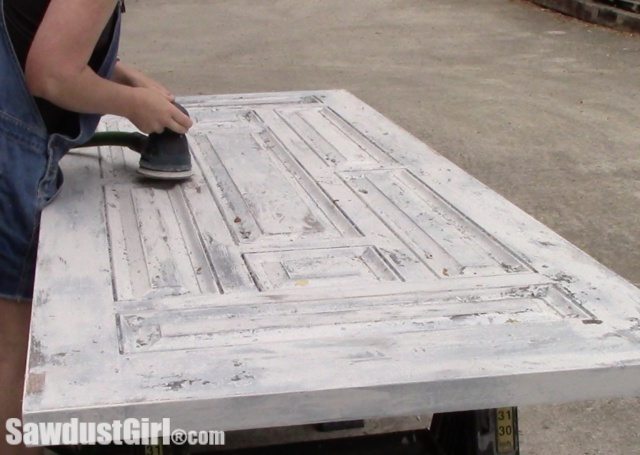 I periodically smacked a scraper or putty knife against the door creating realistic distress marks. 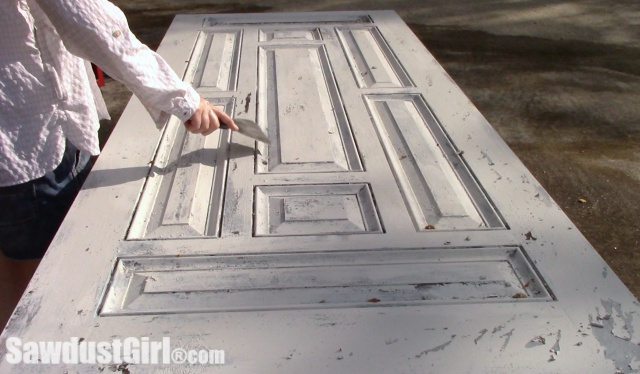 I also discovered that using my air compressor and a small tipped blower nozzle would make the paint peel up in a really cool random way that I couldn’t achieve with my scraper. 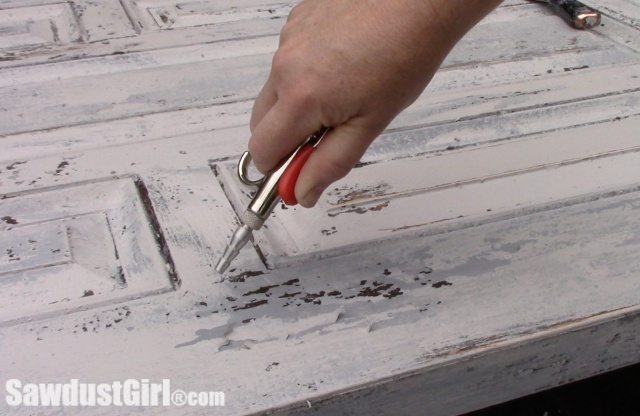 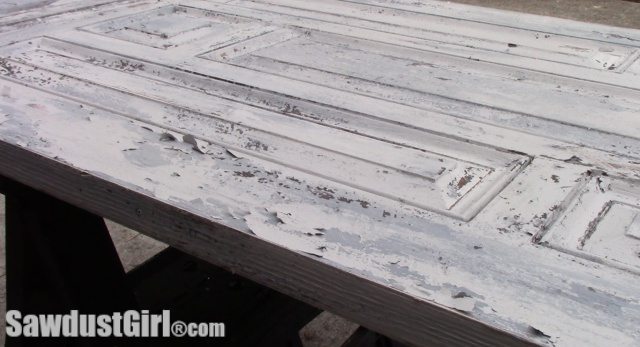 I’m really liking how the door is looking at this point but I really really like the few areas where the original Kitchen Scale blue/green is showing through and decide that I want more of that color.  I added one more patchy coat of Kitchen Scale. 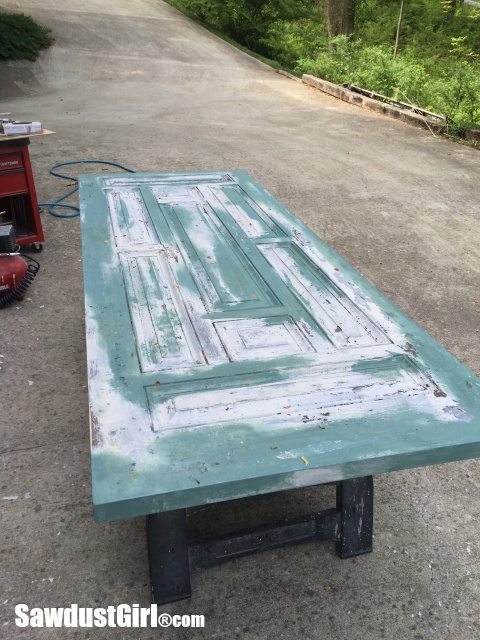 I may or may not have followed that up with more Light French Grey and then more (dark) Argus Grey.  I spent the entire day coating and re-coating this door — but it doesn’t really matter as no-one including myself will ever EXACTLY recreate this look.  Every chippy paint project is going to be unique so just be creative and go wild with your unique application! 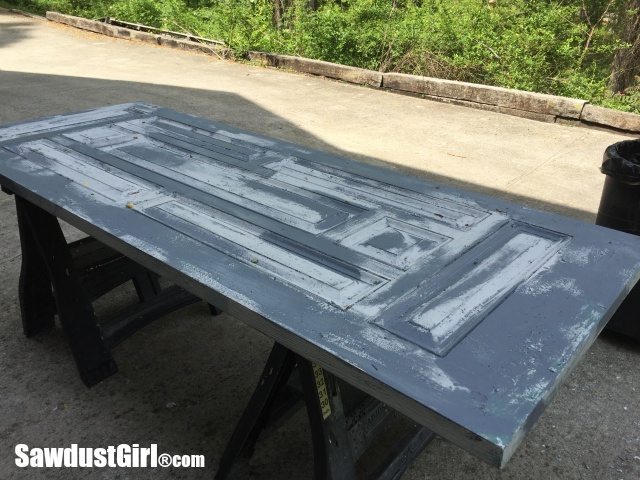 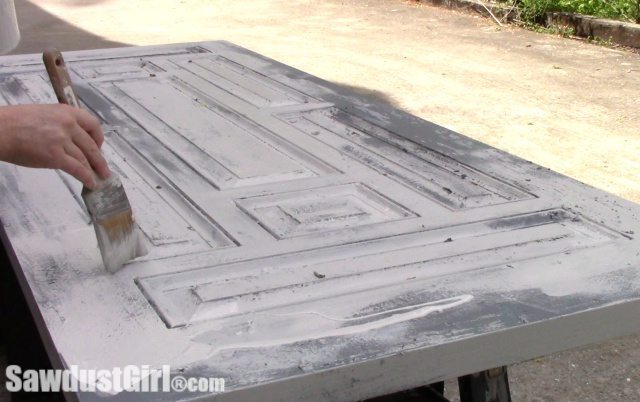 After the last coat was barely dry to the touch, I went to work scraping paint back off again.  In some areas more layers scraped off exposing a different color than in other areas.  Which is the beauty of a “decades old, chippy paint door” in my opinion. 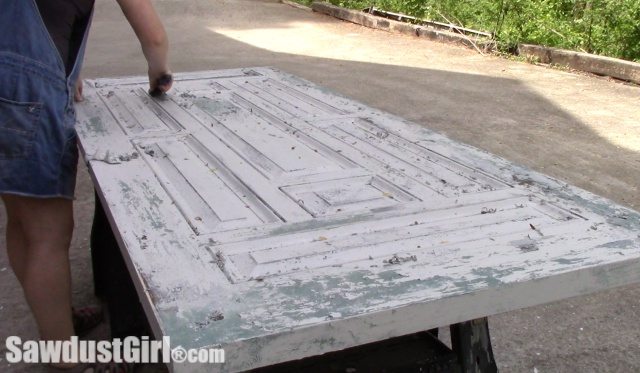 I used a couple metal putty knifes, sand paper, compressed air AND an electric buffer to remove additional paint here and there — where I wanted to see more color or original wood. 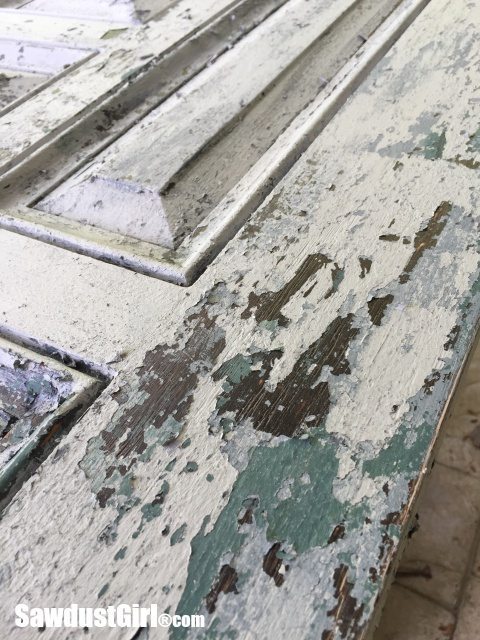 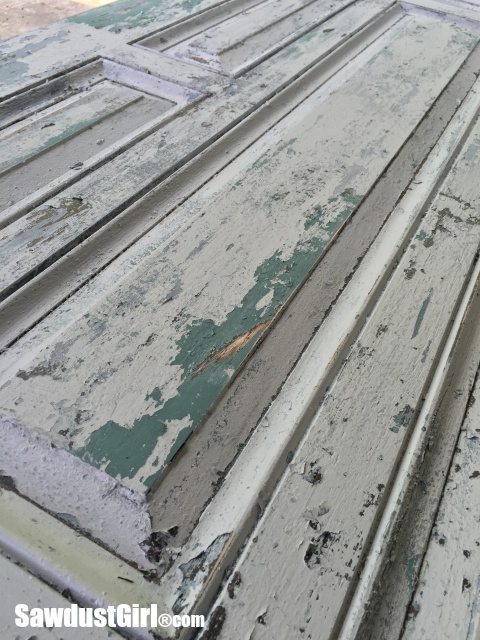 I applied some clear paste wax to seal and polish my chippy paint barn door.  I like the look and the feel of the wax finish.  It should also help prevent further paint flaking. 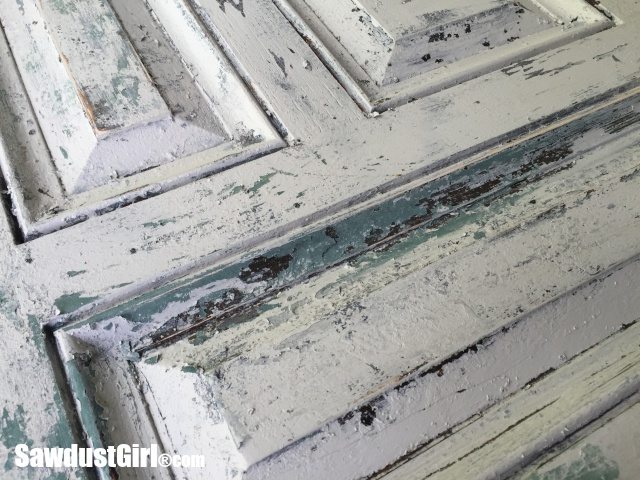 I could have stopped about 10 times during this process and been happy with the chippy paint effect that I had achieved but it was such a fun process I just kept playing around with it.  I know this look is not for everyone and that’s OK but I LOVE it!

The trolley wheels and track hardware is from a local farm co-op (Tractor Supply, Farm-n-Feed…). 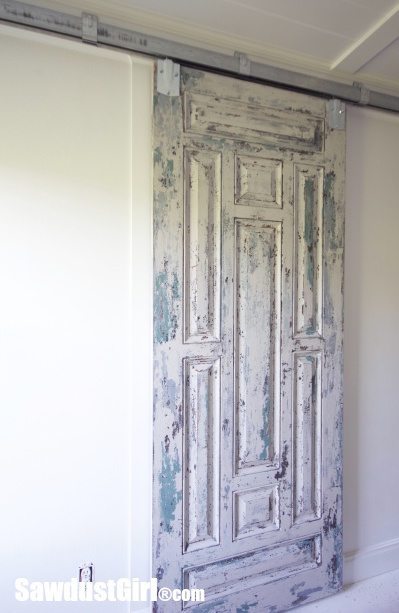 I’m happy I decided to bring in some blue and green into the door.  It’s not enough color to dominate the space or demand I continue using those colors throughout the studio.  But while I have the family photos in their current frames, it’s a fun connection but not too matchy. 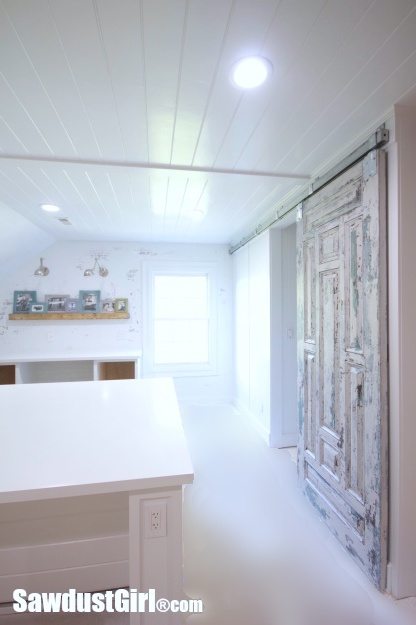 « What is hardboard?
Building a House for Shelby »