Val has been hard at work in the appropriate Sawdust Girl attire.  PJ’s!  LOL Catch up if you missed part 1, part 2, and part 3. 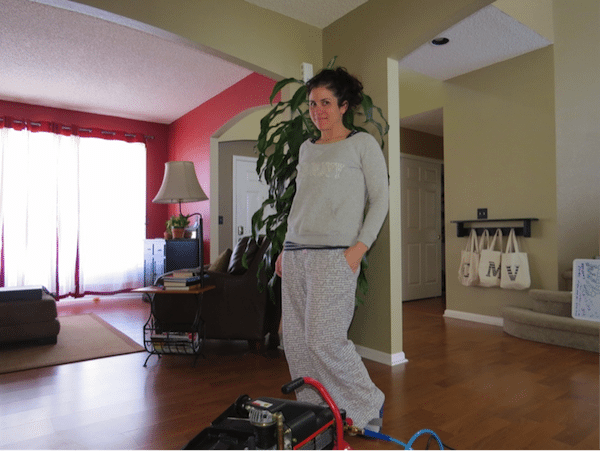 And she is making good progress.  Bases are done. 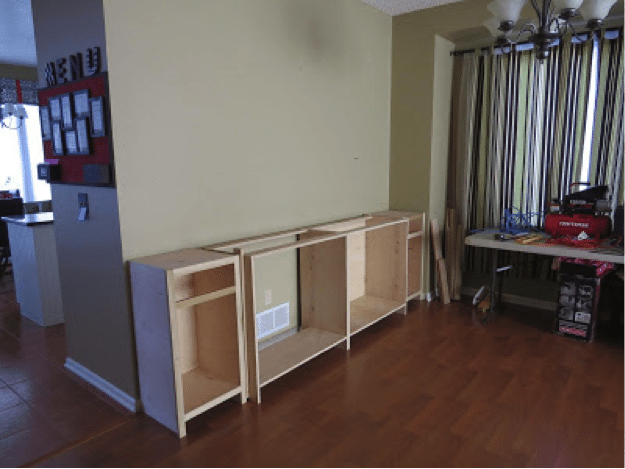 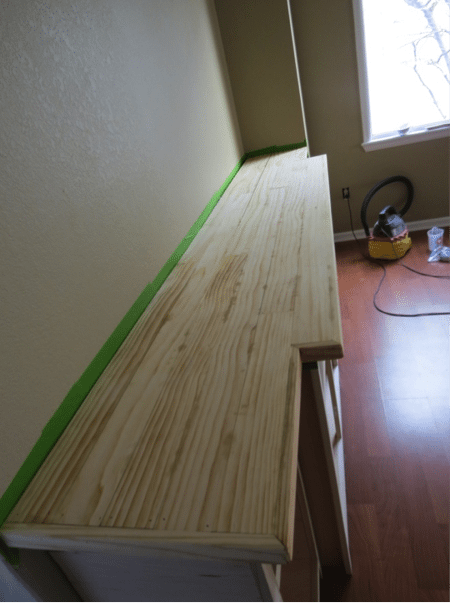 When it came time to build the book cases we had a design dilemma.  Remember that?  Val agreed to let me ask for your opinions and you all spoke up.

This is Val’s take on the whole thing…and what she decided.   🙂

The original design called for three cabinets across the bump out, flanked by the two side cabinets.

There was a bookcase over each door/drawer. 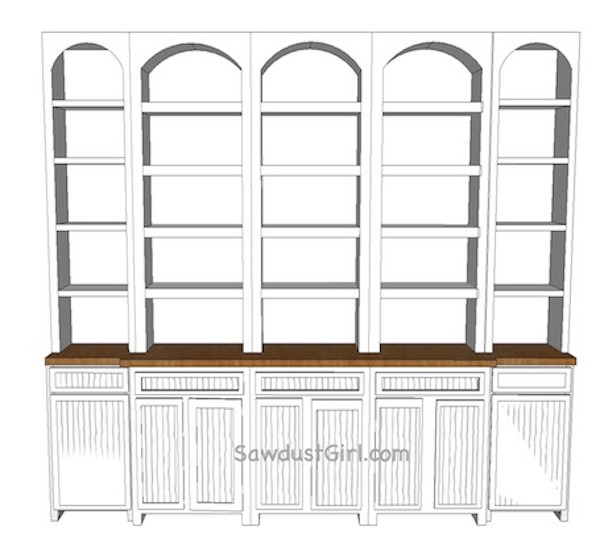 The current design is a total of four cabinets and if we do a bookcase over each door, it looks very locker like. 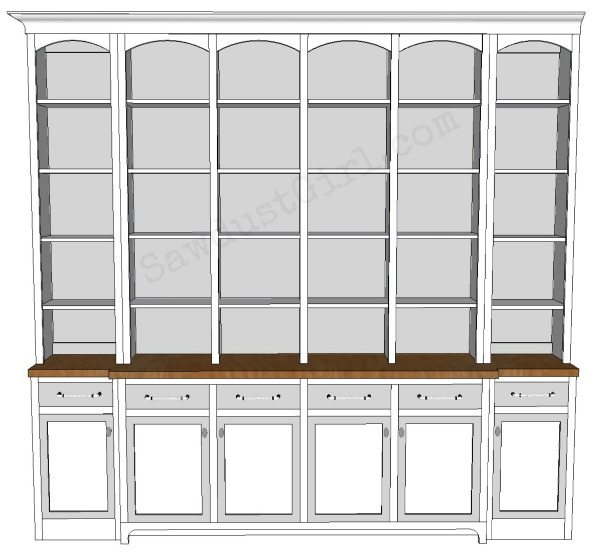 I go ahead and build the two outer cabinets since they will remain the same. I set them right next to each other so we can see how it would look with a bookcase over each cabinet. Mike and I agree we do not like it, at all. 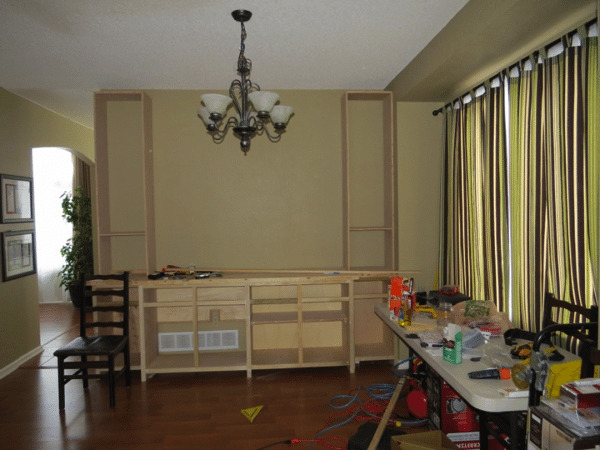 So the next logical thing would be just two large bookcases, one over each set of middle cabinets.  I build them. The middle cabinets are 37.5” across and the largest span of shelving Sandra recommends is 32”. There is a reason for that folks. We have major sagage and there isn’t even anything on the shelves yet.

Sandra suggests I just make the cases 32” each and we can add a decorative pillar on each side. 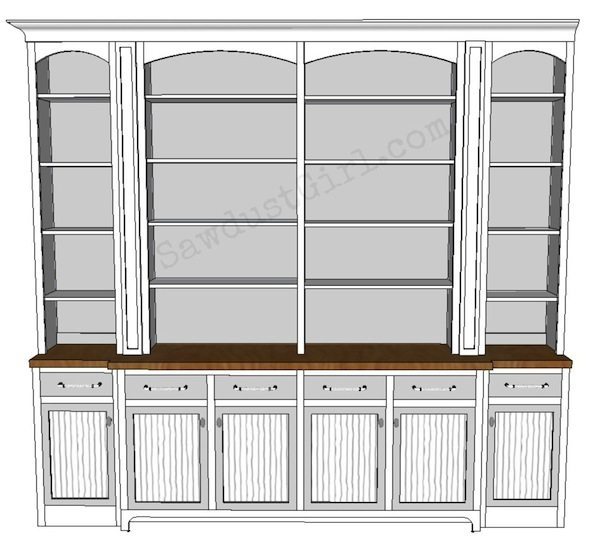 It bothers me to waste that much space! So I jokingly suggest wine pillars. She designs them and they definitely are different. 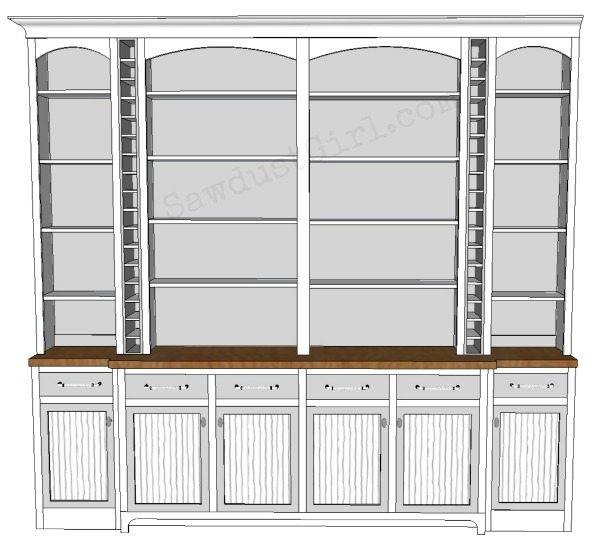 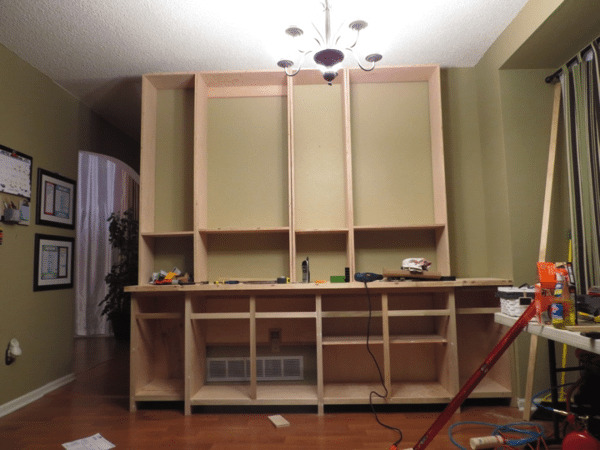 The bookcases look great to me. The middle section is centered over the middle of the cabinets. I send a pic to Sandra and text a pic to Mike.  Sandra responds “I hate it!” and Mike didn’t even text back, he felt inclined to actually CALL, on the way to the airport, to express “I HATE IT.”

I live with the design for three days because Mike was out of town and I thought perhaps I have a defective eye for design, but they did not bother me like they did the other two. I think it’s the OCD element that their personalities include that I am missing. I really felt like Mike needed to see it in person.

Sandra was less disturbed by them on day two, still didn’t love them.  We decide to put it out for a vote to all her readers! I feel validated in tossing the original design option since not one person chose it.

And I felt validated in my design choice because a lot of people were selecting it! 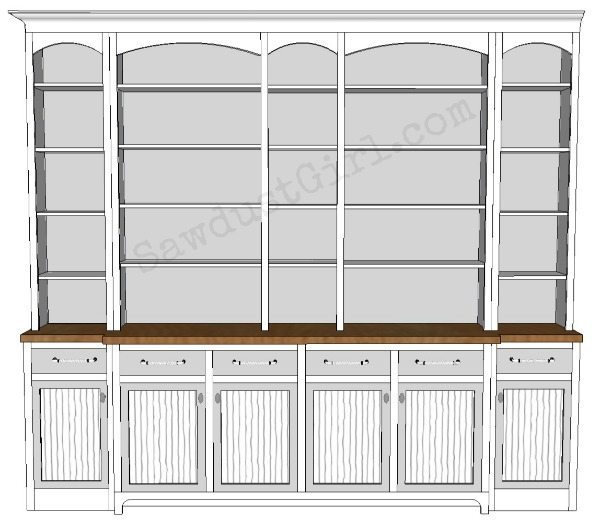 For the most part, though, everyone is selecting the one that Sandra suggested.

A few people, including my neighbor Clayton Sandell, are passionate about choice three.

I just don’t know that we have that much wine and I just see lots of dust pockets!

I show my mom and she has the same visceral reaction as Mike and Sandra (plus the same OCD) and proceeds to spend 15 minutes telling me how it is the wrong choice. I am still not convinced. Mike comes home and sees them in person for the first time. He is not as bothered by them in person. I switch them around to illustrate the concept that Sandra has suggested and he says “I really like that one better.” I say, “Allrightly, we have a decision.” Who am I to argue with the OCD folks?  I send Sandra a message that we have a decision and right when she calls Mike say “Honey if you really like the fiver, it really doesn’t bother me as much as it did, I think I can live with it.” AAAAAAAAAAAAAAA.

So Sandra and I discuss what to do next and I really need to rebuild the two center shelves to 32” so that they pillars are only 4 inches. Right now they would be almost 8 inches and that is silly. I am happy to have a decision made and off to sleep I go. 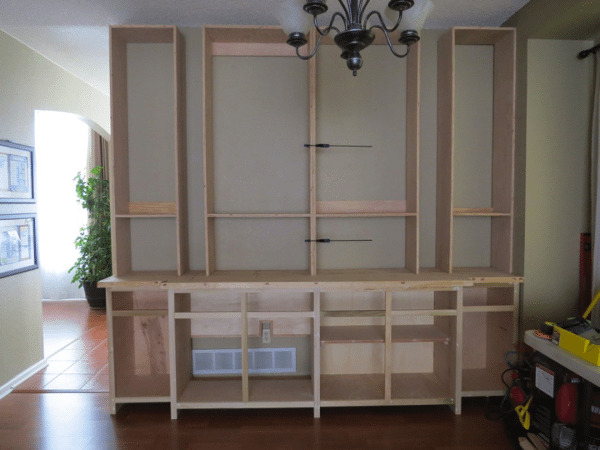 I wake up and first thing, I go look at the shelves. BOOM, no doubt, no questioning, it’s the right thing to do. I really admire Sandra for allowing me to come to that decision on my own. I think Becky and Malisa calling her bossy might have something to do with it. I kid! She is really not bossy, she was all set to let me make a bad decision, if that was what I wanted. It was awesome.