This post is a dose of reality  all who are under the MISimpression that my whole house resembles the functionality and aesthetics in my Closet, Library or Workshop.

It doesn’t.  Those are just the only rooms I’ve gotten to so far.  (Oh, and Madison’s bedroom – but that looks like a tornado blew through so I just try not to think about that room…and try to avoid going IN it anymore.

Anyway, welcome to my new project:  The Laundry Room 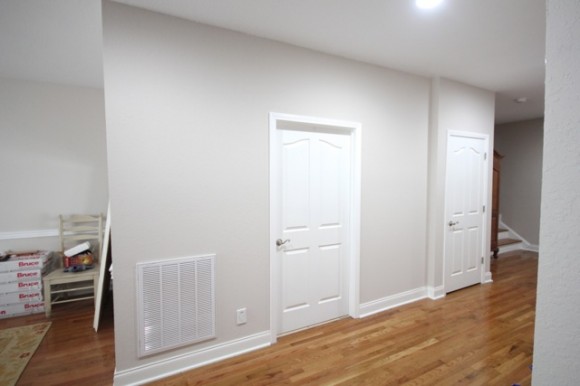 Come on in.  Seriously, I DARE you! 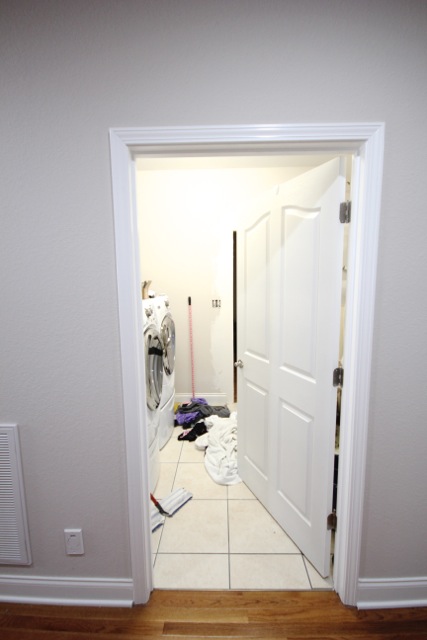 ‘Cause it just keeps getting better and better! 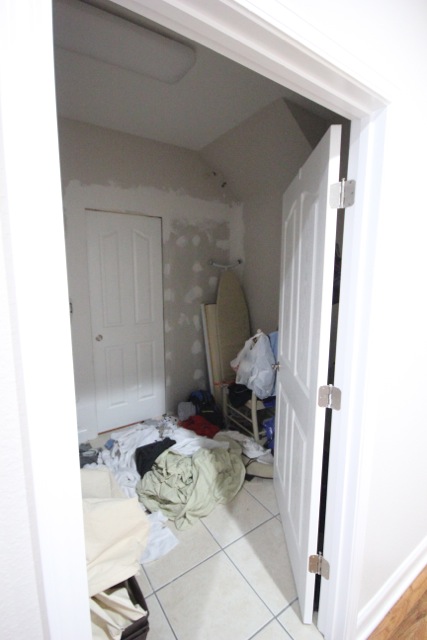 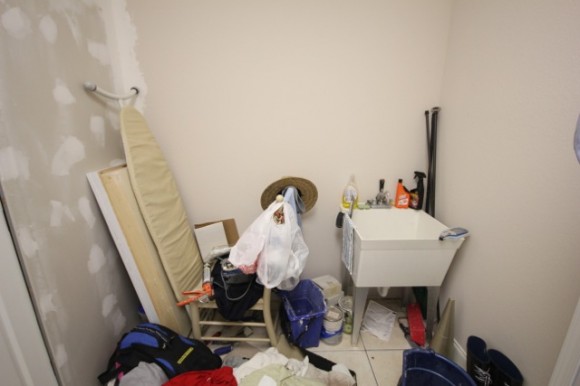 Two incredibly stupid things that were done in this small room.

1.  The two doors both opened up INTO the room blocking off the entire wall behind them.  The door against the far wall is the one my dad and I turned into a pocket door but the other one still opens IN.  That’s the first thing I’m going to change! 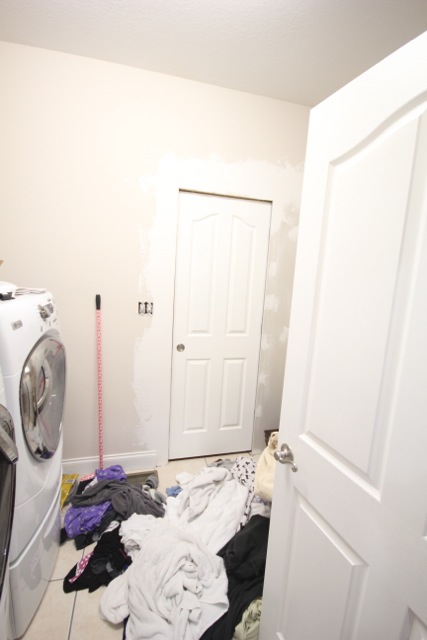 2.  The single, small, insignificant shelf that is in the entire room is so far above and behind the washer and dryer that only a giant could reach it.  Lucky for him, Wes is kind of a giant so he doesn’t stand on tippy toes like I do.  That’s gonna’ change too! 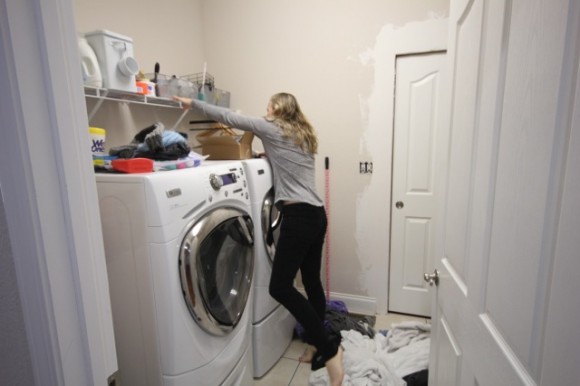 The ONE good thing about this room, it’s a nice size.  I can work with it. 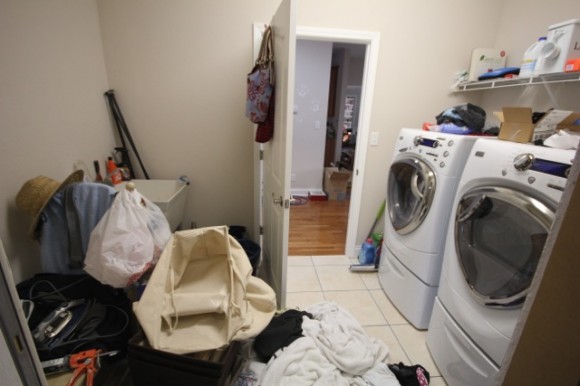 Well, and the GE smart dispense something or other washer and dryer that we bought when we moved in.

It was a splurge.  We bought the cheapest ones we could find in our last house because the house before that we had a nice set that the buyers wanted to keep — for free…and because we WANTED to sell the house we said ok.

Anyway, after staying in IL for almost 6 years with the cheapest washer and dryer on the planet, we wanted nicer ones.  SO we kind of went over the top.  I only add detergent once every 6 months and the washer talks to the dryer and tells it what to do with the batch that it’s about to eat.  They’re kind of awesome. 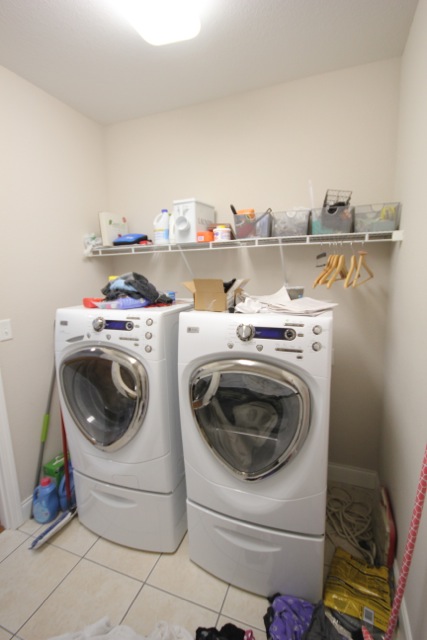 Oh, and there is a sink in the room.  It’s big and not pretty but at least there’s water and a drain.  I can work with that too!   I can even work around the weird ceiling.  I think that dropped ceiling hides the stairs…maybe?  No idea.  In this house, anything is possible. 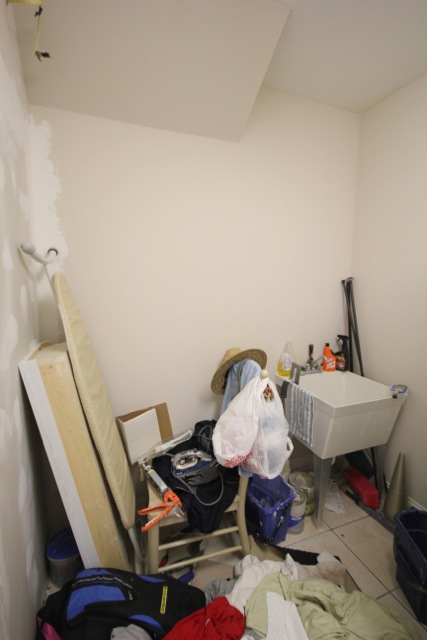 So, yeah, this is my new project.  It shouldn’t take months but I always think that so I’m not even making an estimate.  Just push forward until I come to the end.  That’s the plan! 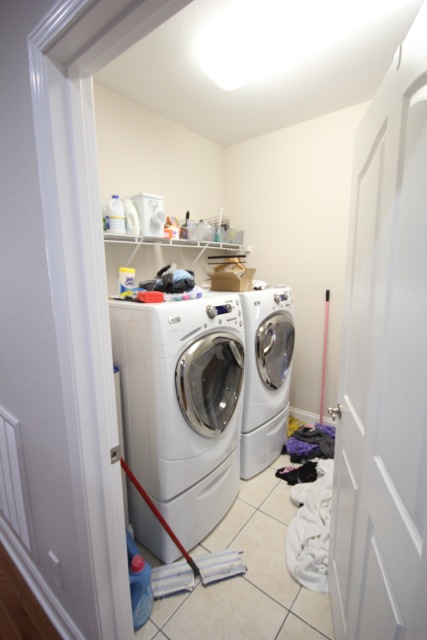