Last week was CRAZY!  I spent the entire week in Scottsdale AZ prepping, shopping for and renovating a laundry room for a cute, brave couple that agreed to let some random stranger (that’s me) and a WHOLE TEAM OF interns, assistants, producers and camera crew into their home for two days while this makeover unfolded on camera for  SheKnowsTV.

I’ll tell you, other than the stress and insane amount of physical labor on no sleep — I had a blast!  I miss my crew!  The whole team was awesome;  fun, funny and very encouraging.  I had a few awkward moments in the beginning and they were very gracious about saying things like, “That was great! Now let’s try it again with…”

The fun thing is that I know the other designer — and you probably do too.  It was Sarah of Ugly Duckling House!  SHE is pure awesomesauce! 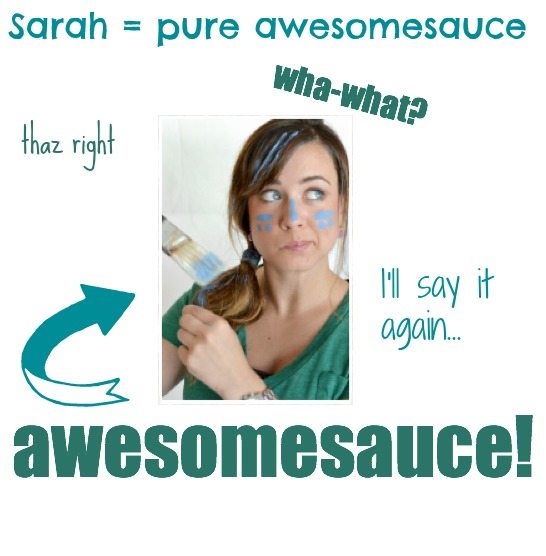 Sarah and I were both so busy that we only had time to grab dinner together one night, at 11:oo, after all the stores were closed and we HAD to stop shopping for our houses.  Applebee’s was still open so we dropped into our chairs and almost fell asleep in our soup!  (Neither of us had soup but that story made for  a good visual!) 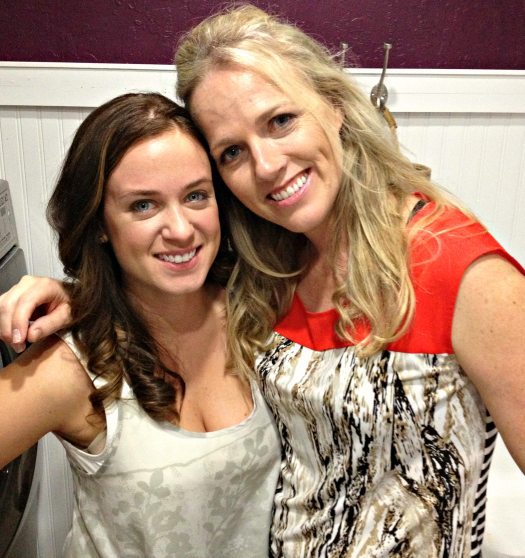 This is actually MY laundry room almost finished.  Sarah was done with her house and came over to help me out — because I WAS SOOOOOO not even close!

(Shhhhh.  Let’s pretend you don’t know about that though.  K?)

Anyway…  I think it’s the first time I’ve been in “Hair and Makeup”.  That was fun! 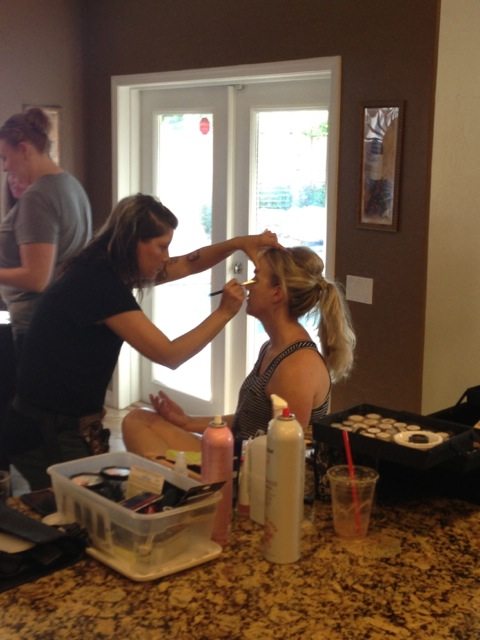 It wasn’t all fun and games though.  It was hard work.  I can’t remember being so tired EVER in my life.  But then again, I tend to forget things and move on very quickly so…

Things could have gone a little better with the right tools — but you can’t plan every little detail!  😉

The miter saw had a very dull blade so that was almost useless.  Plus, the blade was on backwards initially so it was just burning wood.  I had my PA go cut some 2×4’s for me and I walked out and saw smoke billowing up.

Then I couldn’t find the screw to release the blade guard — the sound guy found it.  Yeah James!

What an adventure!   I decided to just roll with it and see what we could do with the time and supplies we had!  It was fun!

Shout out to Shaun, my PA for the week! 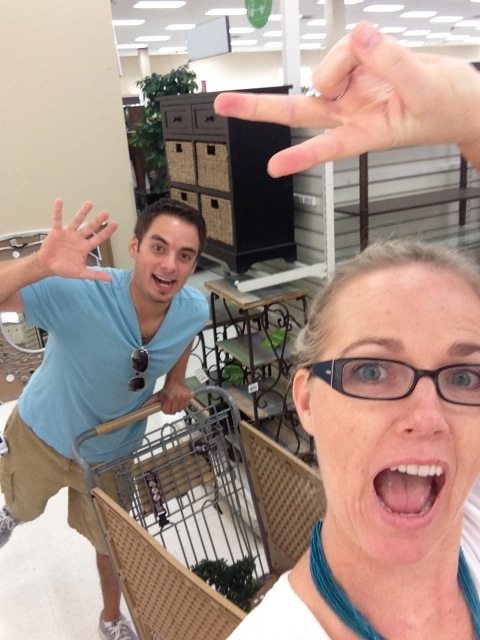 Shaun was awesome.  He was the “get it done guy”!   If he didn’t know how to do something he figured it out.  I had no idea who was going to be there to help work on the house or what skills they would have so I was very happy to learn that Shaun had some construction experience.

Half the room wouldn’t have happened without him!  (Thank you Shaun.  I’m SOOOO sorry you had to work so hard those two days.  That was rough!)

Thank you to the whole team of interns and production assistants, the camera crew, the sound guys, the producers — anyone else who helped out: Lita, Ted, Morgan, Dustin, Alex, Andrea, Erin, Charlie, James, Chelsea, C, the guy who’s back I stood on to caulk the crown moulding, Ryan –who missed turning in a paper because  he came to help (yikes!) …  There really was a large crowd at the end and I don’t know everyone’s names (sorry about that).  Thanks!

I didn’t finish my room like I wanted to.  Like a complete newbie, I thought “two days from 7 to 7” meant I would have 24 hours to work on the room.  I didn’t realize there would be a lot of time where we couldn’t make any noise because people were being filmed for interviews, or where I would be being interviewed …and no noise means no work.

Plus, the first day was only about a half day because we had to shoot all the initial interviews and introductions…like me walking up the street to on my way to meet the homeowners and the part where I knocked on the door TO MEET the homeowners, James and Susie.  They did great.  ME?  Well… 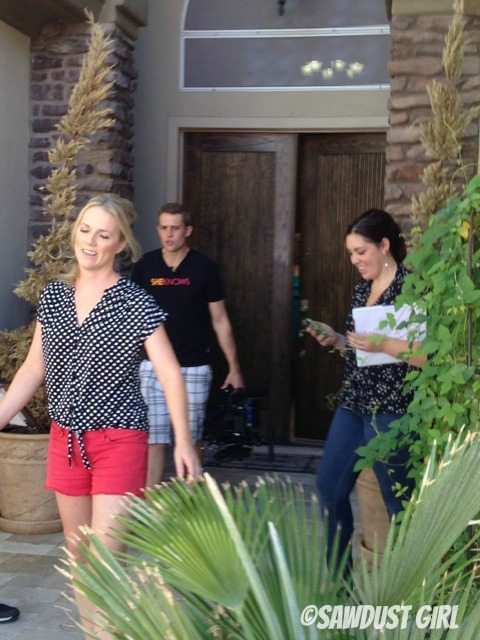 This might or might not have been the fifth time I walked back to go march up to the door and ring the doorbell.

Behind me are Ted (usually hiding behind the camera) and Erin (Producer).  I think they’re both people you  might want to avoid in a game of poker. I couldn’t tell if they were lying through their teeth when they were saying encouraging things or if they genuinely thought I was doing alright.  Thank goodness.  😉

I’d rather be ignorant than self conscious– any day.

I guess we’ll just have to wait until November to see how it all plays out and if they were telling the truth or lying through their teeth!