You thought I was adding on to the house, didn’t you?  🙂

This is Maya.  (Madison named her, she’s been studying Mayan civilization.)  She WAS a stray. 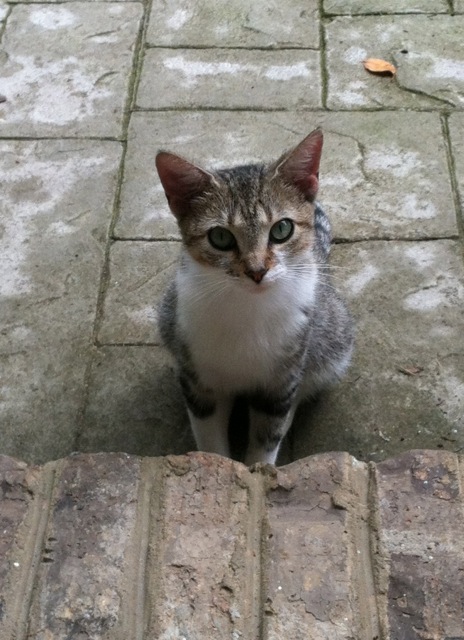 She showed up one night last week skin and bones.  I think she was eating a dead squirrel (no idea if she killed it or it fell out of a tree and broke it’s neck.  Unlikely.)  I took Brody out and he went crazy barking into the bushes.  It was about 10:00pm and I was freaked that it was a mountain lion or something that was about to jump out and eat me!

Brody disappeared and came back out with a tiny dead animal in his mouth.  I about threw up!  Then I heard the mewing and I immediately thought he’d just killed a kitten and there were more back there crying.  I yelled at Brody and sent him to “time out”…and then I think I did throw up.  Then I called for Wes to come take care of the dead animal because I couldn’t do it.  He discovered that it was a squirel and for some reason that made me feel better.

Anyway…long story short.  We fed her some milk, because that’s all we had at 10 pm and went to bed.  She was still there in the morning so we gave her some more milk (and then went to the pet store for some cat food which she practically inhaled.)

I spent about 20 minutes introducing Brody to her.  It involved a LOT of barking and “time out”.  Finally, he stopped barking and went to sniffing.  She rubbed her head under his neck, he licked her ear…and the rest is history! 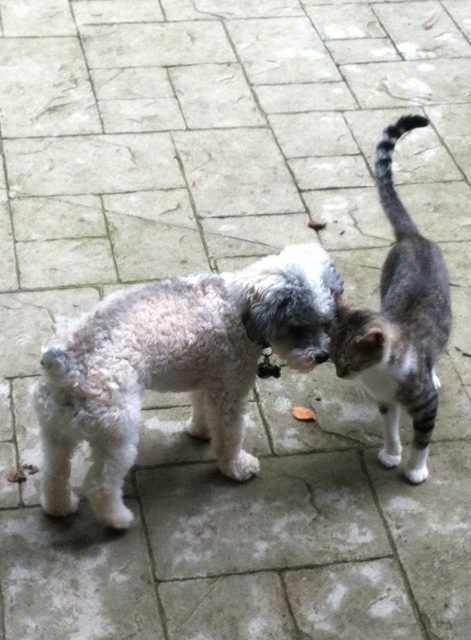 I think they really like each other.  Brody runs to find her first thing EVERY TIME I open the door to let him out!  They follow each other around.  She follows us when I walk him around the yard.  They sit together and hang out on the porch.  It’s the dang’dest thing!

We took her to the Vet and they checked her over,  and treated her.  She has a BB above her shoulder.  (Which makes me cry!)  She’s scheduled to “get fixed” tomorrow so I guess we’re keeping her (if only for a while).

The sad thing is she has to stay outside because Wes and I are both VERY allergic.  We got her a house/post/climbing thingy that is on the front porch and  food and water dishes that she eagerly runs to when I come out in the morning.  I can tell she wants to come inside as she looks in longingly when the door is open.  I feel so bad when I bring Brody in and she has to stay out.  She lays down on our door mat.

I’ll probably have to find her a home with a family that will love her and let her INTO their home.  She is too cuddly, tame and tolerant to be an outside cat.

We’re going to love her as long as she’s in our “family”!

It makes me sad to ask but…anyone in the Knoxville area want to adopt a cat?  We’ll all miss but it’s probably best.