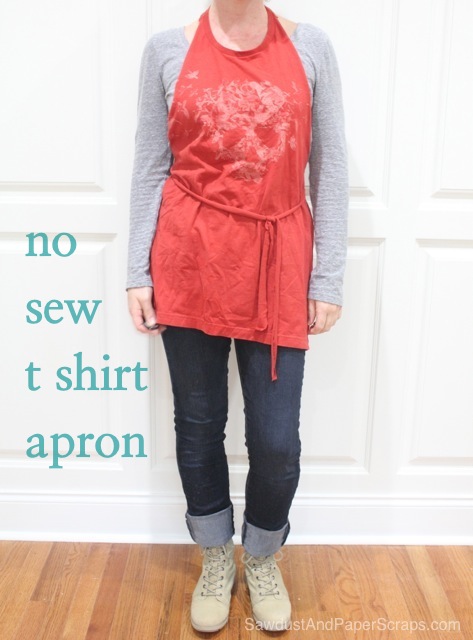 Lately I’ve been spending more time building and painting than baking and candy making.  I used to enjoy doing those other things –occasionally.  I did make time to whip up a funky little apron recently.  Why?  Because I really should wear aprons when I PAINT because I have such a bad habit of wiping my hands on my pants!

I made this apron by cutting up an old T-Shirt — no sewing involved.   Quick!

T-shirt aprons are soft and movable.  Stiff aprons make me feel like I’m wearing an extra starched jacket that is two sizes too small.

This one cost me $0.00 because I raided my husbands t-shirt drawer for an old shirt but you could buy a super inexpensive one from Ross or a thrift store and it would still be  a thrifty gift. 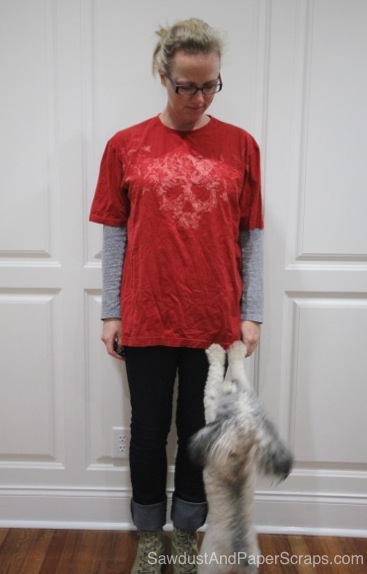 There is absolutely no sewing with this tutorial.  Just a couple cuts here and there and you’re done.  Bam!  You can use either scissors or a rotary cutter.  I used both.  One here –the other there. 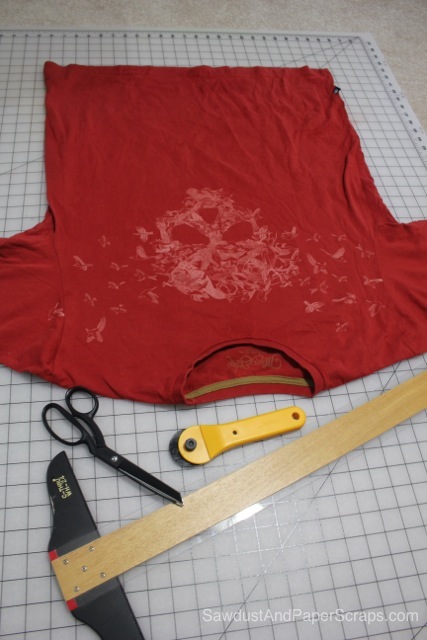 2.  Now, with the t-shirt laying front down, pull the front section up out of the way and cut two strips up the back on both sides as demonstrated in the following picture.  Again, I stopped the cut 2 1/2″ under the armpit. 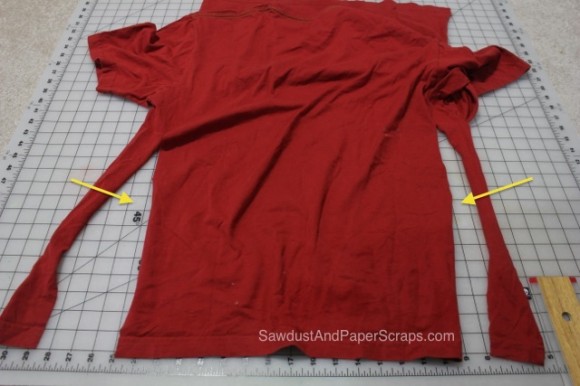 3.  Now cut straight across the back so that bottom “flap” is removed. 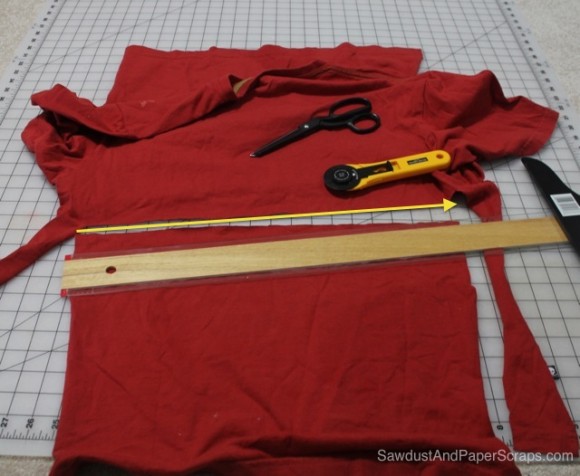 4.  Now flip the tshirt over so it’s front side up and cut off the sleeves.  Start at the armpit and curve right up to the ribbing on the neckline.  Follow my yellow dotted lines.  I first attempted to create a  different pattern — which didn’t work out so I came back and cut where the yellow lines are. 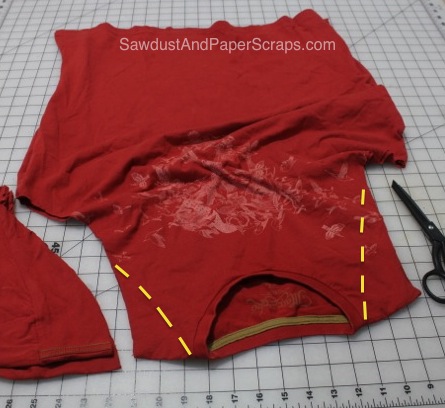 5.  Now cut around the back of the neck and that will create a flap on the top of the shirt, much like the one we started out with on the bottom of the shirt back.  Cut above Leave a 2 1/2″ strip and cut the rest off.  It will look like this in the back. 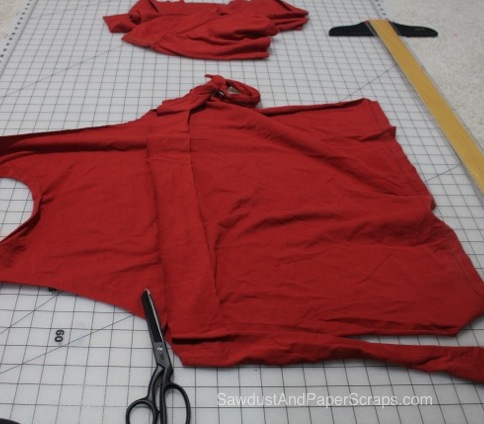 And this in the front. 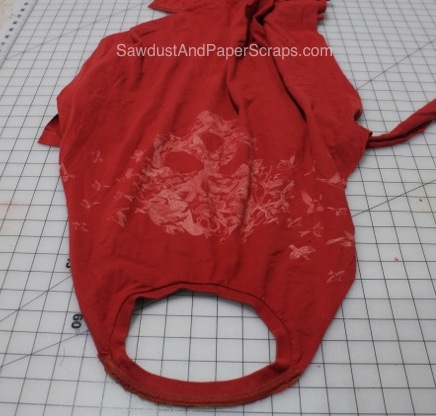 So now you’ve got two tails hanging down the back and one strip right across the back. 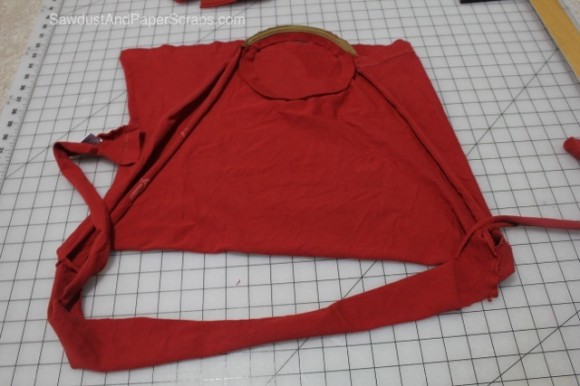 6.  You’re going to cut that strip in half lengthwise.  Start by cutting halfway up the “strip” on one side and then keep cutting right down the center. 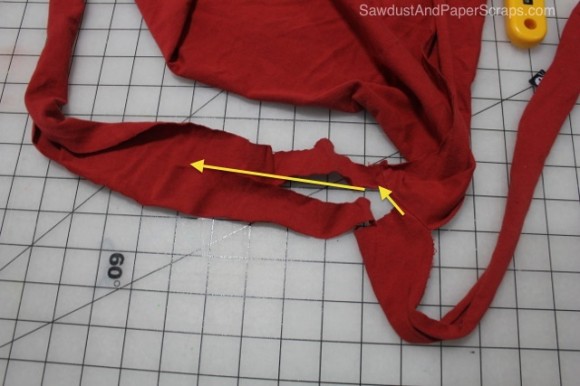 7.  Cut until you come to the other side of the strip and then cut up so the top section of the  strip separates from the shirt on that side but the bottom half is still attached. 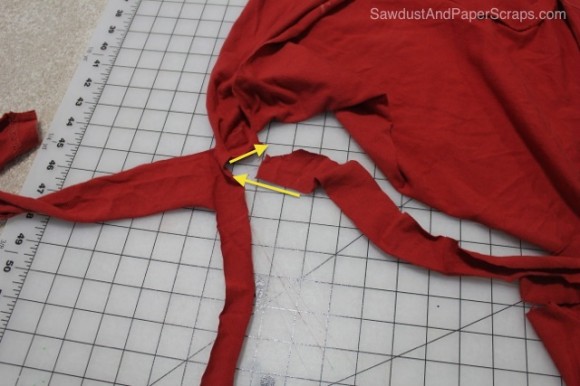 8.  And that gives you two tails one each side of the apron.  No worries if your cuts were less than stellar, mine certainly weren’t great.  When you stretch strips of knit, it curls inward so just give each tail a gentle tug.   That will hide most of the imperfections. Snip off the ends that have the original hem because that will prevent the end from curling and make it look silly.  Clean up any odd angles by eyeballing it.  Just don’t cut too close to your ties.  You don’t want to leave them so thin that they tear off. 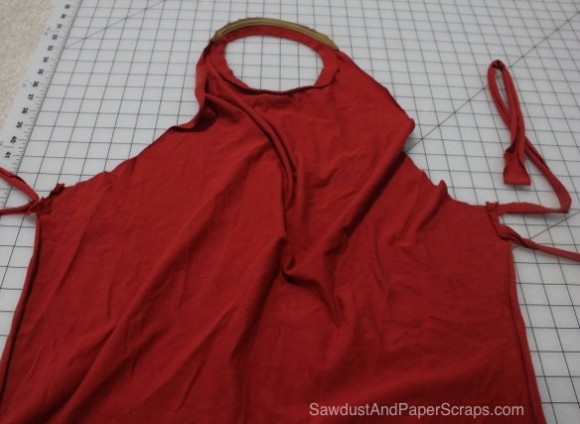 I tie one set of ties in front just for looks.  It gives the wearer a bit of a waist.  The other ties actually TIE the apron on. 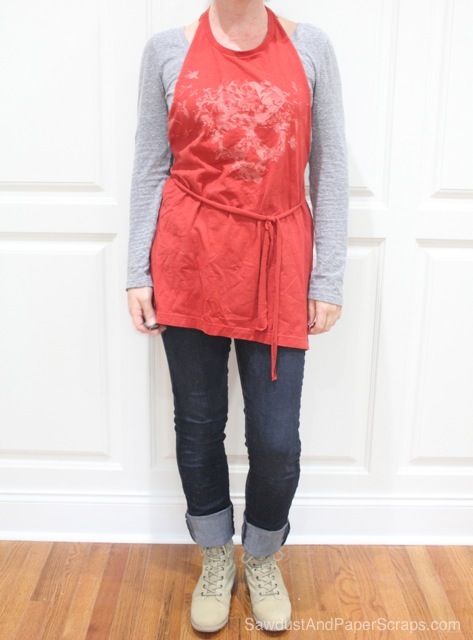 I love the look.  Though this t shirt could have used a de-wrinkling first.  HA!  You can really have fun with designed t shirts or add your own design after the fact.  Fun times– fun times.

« Instruction manuals — Really, you think you can call it that?
Chane- chane- change! {this IS happening!} »