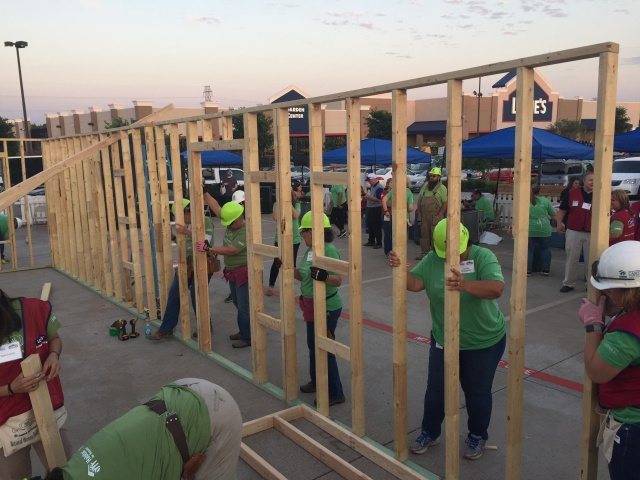 Last Thursday I got to do something SUPER cool!  I got to help frame a house with Lowe’s and Habitat for Humanity as part of National Women Build Week.  Lowe’s and Habitat launched National Women Build Week by hosting Girls’ Night Out events in 10 U.S. cities.  Framing a house is not generally an activity that happens at a typical “girls’ night out” — but I highly recommend it!  Girls that build houses together…are awesome together!  The really fun thing about the Dallas build is that future homeowner was there to help build it. We’re building this house for Shelby Rico and her kiddos!

Disclosure:  Lowe’s is compensating me for my time and effort in following and sharing this story with you.  All opinions are my own. 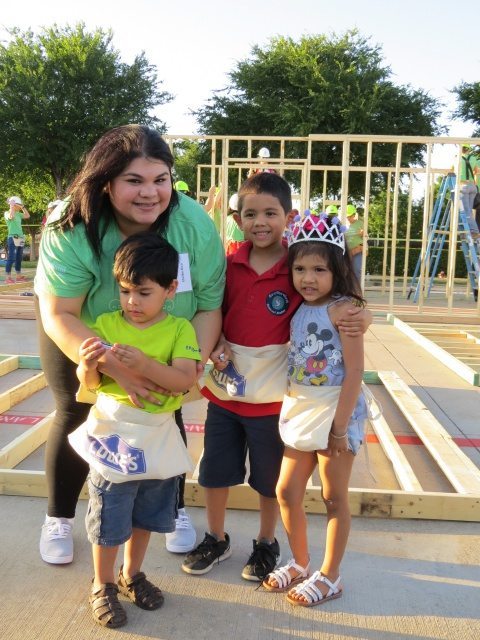 I enjoyed talking with Shelby for a few minutes before the walls on this house started growing like weeds.  Seriously! With over 100 women working, it’s amazing how much gets done FAST. 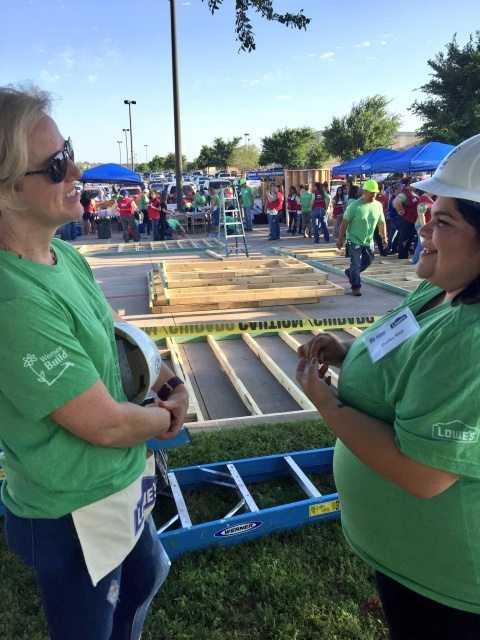 Shelby currently lives with her three children in a two bedroom apartment.  Shelby works as a Dental Claims Biller and every month when she pays her rent she feels like she is just throwing money away.  She has been unsuccessful at getting a home loan in the past and had accepted the idea that home ownership may not be in her future. Then Habitat for Humanity knocked on her door!  Literally.  They were passing out flyers for a meeting in her community Recreation center.  Shelby decided to attend the meeting and even applied to the Homeowner Partner Program.  She wasn’t hopeful anything would come of it so she was surprised when she was approved –but she still didn’t believe a house was at the end of this rainbow.  A short time passed and she got a phone call that it was time for her to choose a lot for her house … and she was like, “so this is real”!

I don’t have to try to explain the smile on Shelby’s face as she recounted her emotional journey through that process because this picture shows it all. 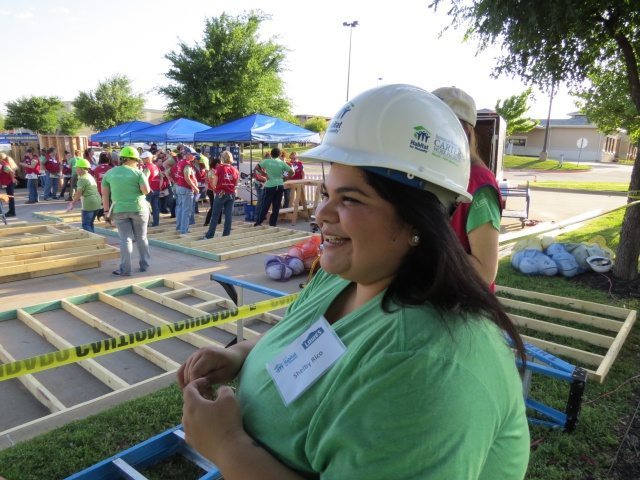 With Trinity Habitat for Humanity, part of the process is completing a New Partner Orientation and 250 hours of Sweat Equity.  Shelby completed her orientation and started earning her sweat equity which is broken down into categories:  100 construction hours, 25 education hours, 15 community engagement hours, 10 hours related to the closing process, and 100 miscellaneous hours (this includes one other person helping in the process, speaking engagements, etc.).

After earning her sweat equity, Shelby will sign her closing papers and take ownership of her home along with an affordable mortgage, taxes, insurance…and all those other little things that come with homeownership!  🙂  In this case, that includes a yard for these three! 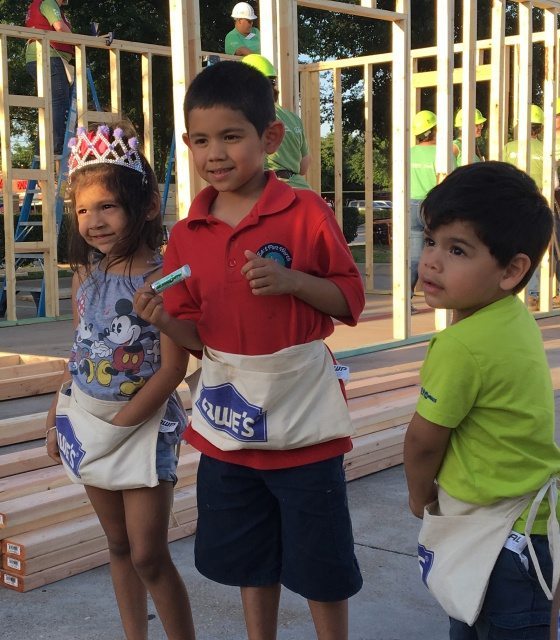 Habitat homeowners help build their own homes alongside volunteers.  Habitat does not charge interest or make a profit. The way they are able to help people build and revive their homes is by working with volunteers and receiving support from sponsors like Lowe’s.  Since its partnership with Habitat began in 2003, Lowe’s has committed more than $63 million to Habitat for Humanity International and helped more than 5,500 Habitat families improve their living conditions.

Lowe’s has supported Habitat’s Women Build program since 2004 and helped launch Habitat’s National Women Build Week in 2008. Each year, Lowe’s provides the help of Lowe’s Heroes employee volunteers and conducts how-to clinics at stores to teach volunteers construction skills.  The Girls’ Night Out event I attended in Dallas had several different stations around the perimeter of the build site.  One station was a “hands on with power tools”.  I LOVE seeing this kind of empowerment clinic.  The women were giving each other high fives after using the tools for the first time. Rock on, ladies! 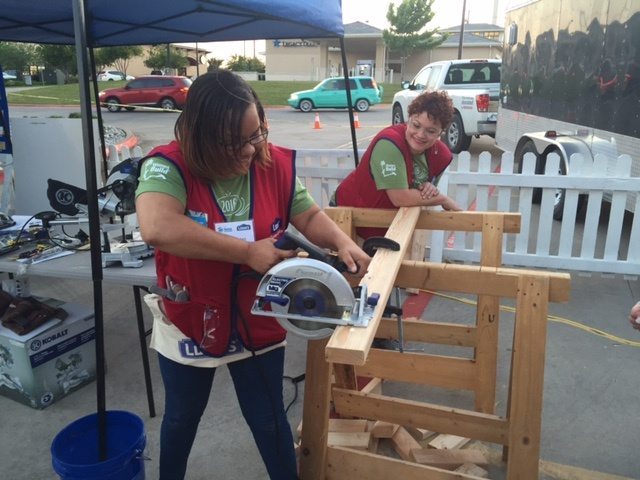 There was a station where you could put together a wooden door mat as well.  The parts were already cut, drilled and painted.  It was a fun activity.  These stations provided additional learning opportunities for the volunteers at the event. They also served the greater purpose of organizing the large group of volunteers from Lowe’s, Habitat and the community into smaller groups, and each group spent equal time at all stations, including the “Home Building Station”. 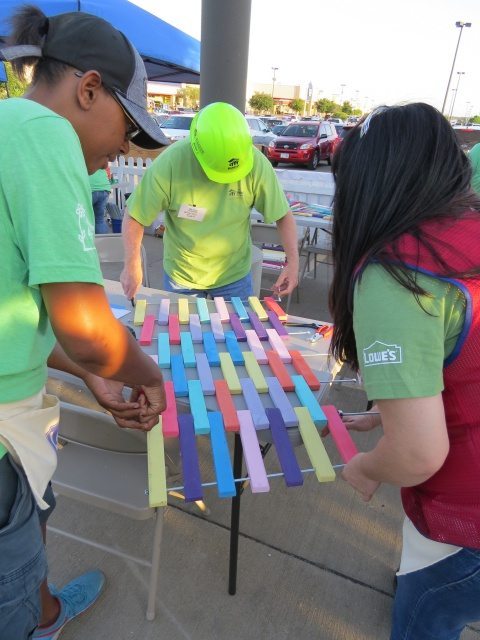 It was necessary (and very smart planning) because there were a LOT of volunteers at this event! 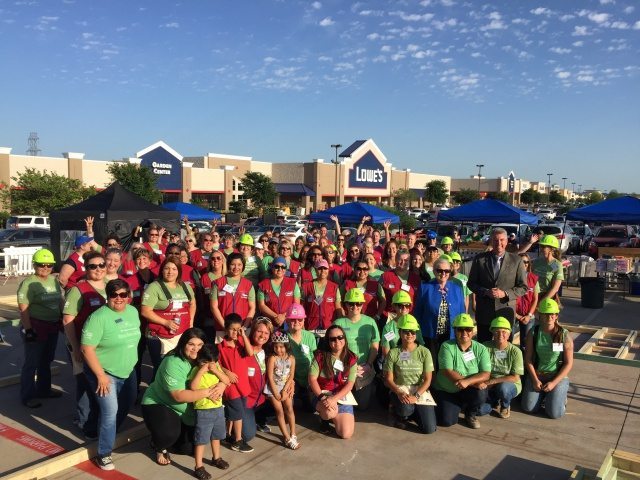 That many people trying to hammer nails into the same area at one time would be an accident waiting to happen.  We were butting into hard hats as it was!  Seriously.  I’m guilty.  I’m also guilty of not leaving the “Building a House” station with my group to go to the other stations.  (Shhh.  Don’t tell on me.) 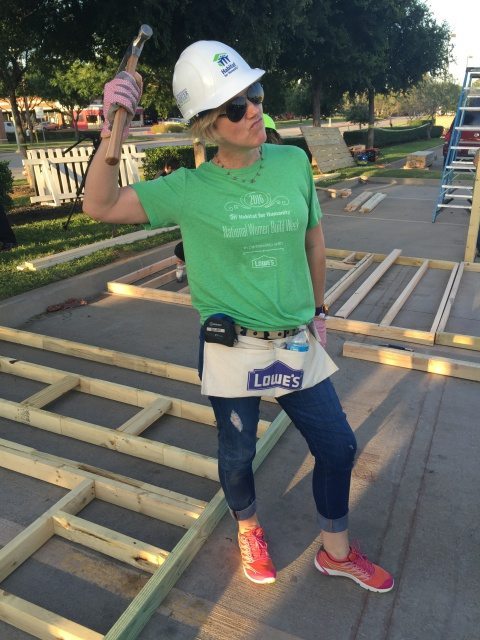 Smaller groups working on the house at any given time meant every person involved really got to help frame walls and experience making real progress on this house. 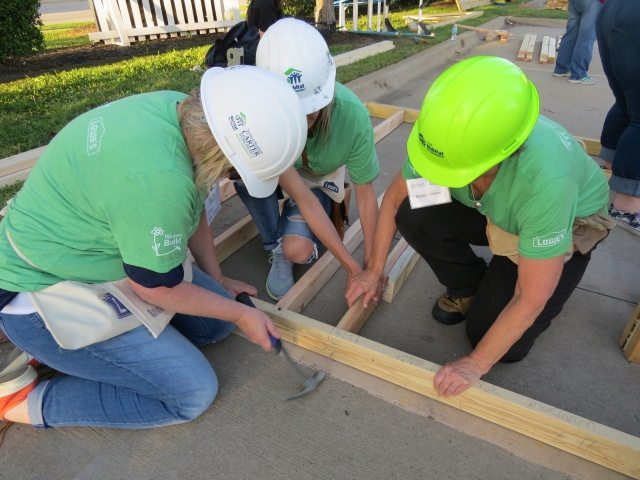 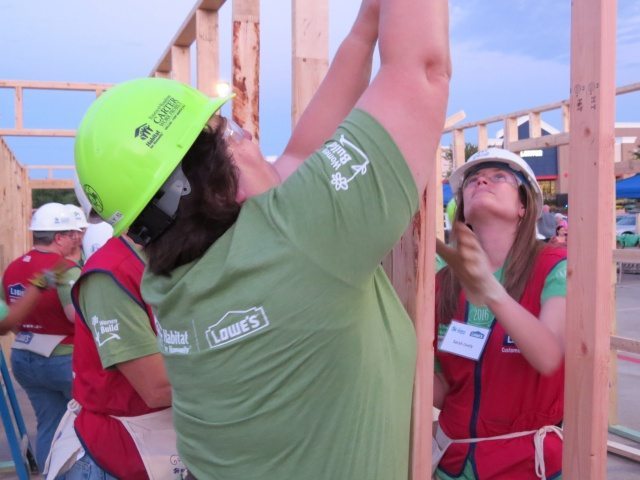 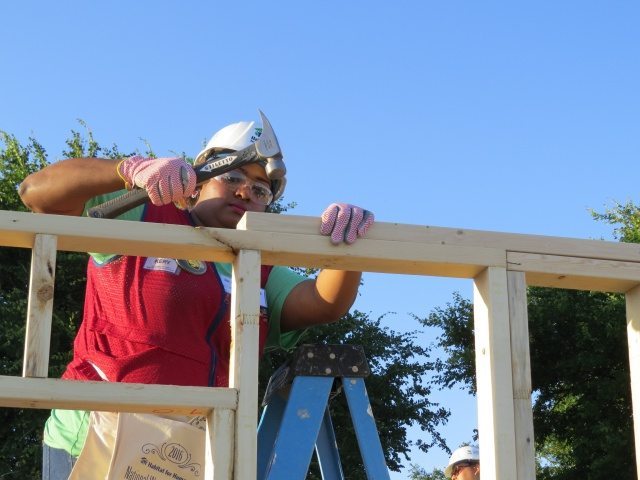 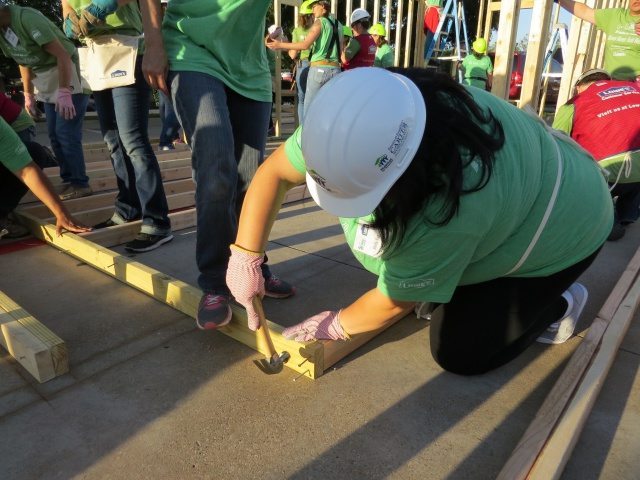 The build was really well organized.  I talked to Carol Yokell who planned out the build.   This lady is amazing.  She has been volunteering with Habitat for years and this was her first build that she planned and oversaw.  I think she did an outstanding job!  I was amazed at the amount of thought that went in to planning to make sure we could get it done in one night. 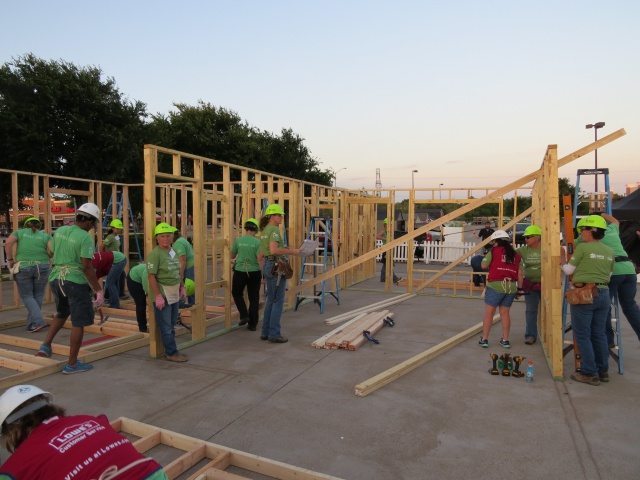 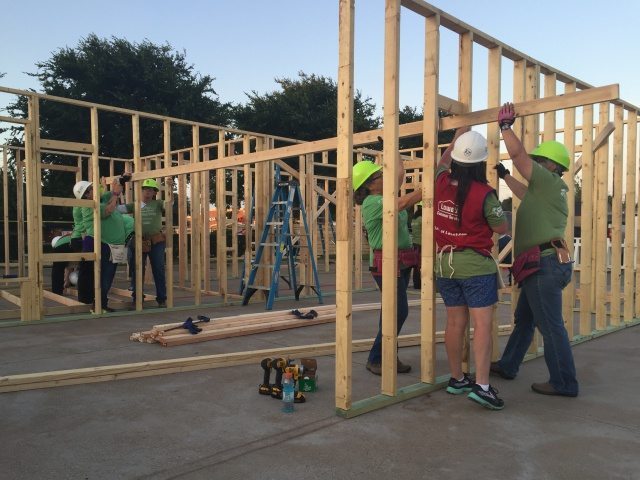 Which we totally did! 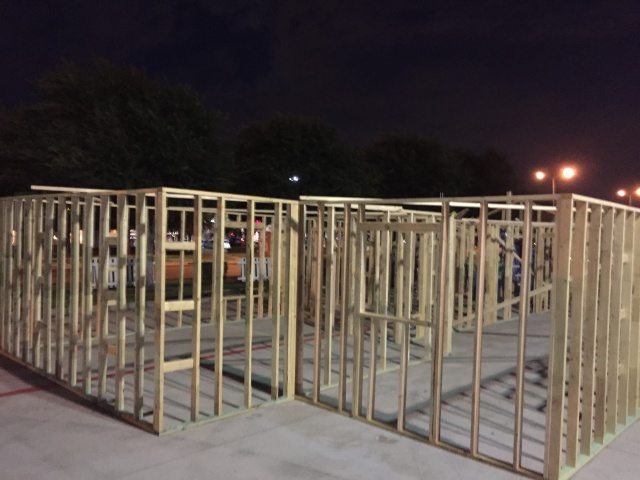 Like me, you may be wondering how this framed house will be moved from the Lowe’s parking lot to the foundation. The walls are framed individually, then moved into place and screwed together.  The screws will come back out so the walls can be hauled to the foundation and then secured together again.

We built that house ’till the sun went down and we were mostly all smiles the whole way! 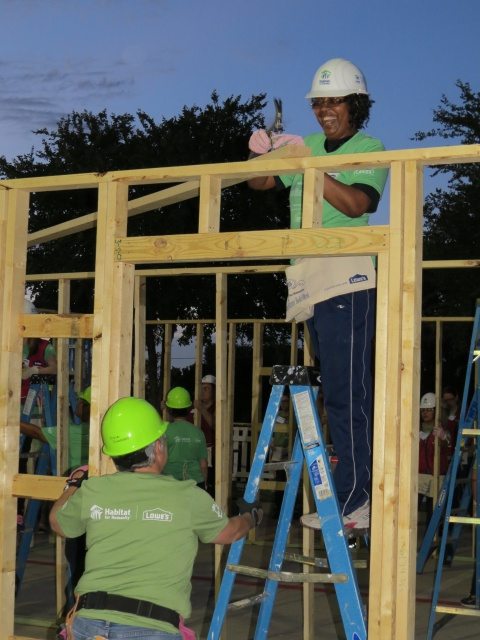 Anna Banana and my name twin Sandra and I smiled a lot.  I think Ann really likes the nickname I gave her and Sandra just didn’t ever not smile. 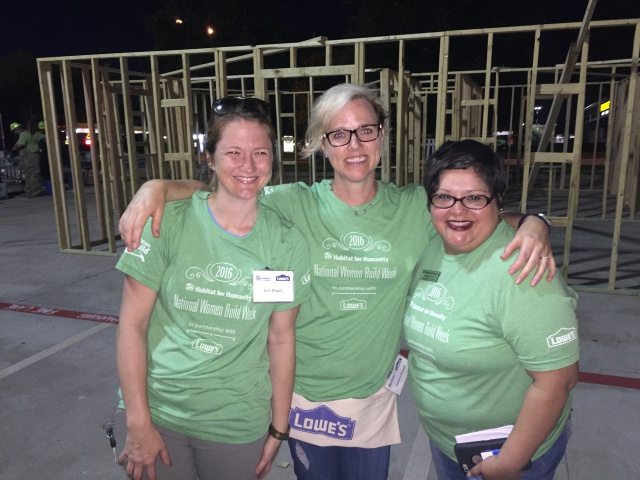 I think it would be difficult not to smile or at least feel happy or warm and fuzzy just being a part of something this monumental.  Lowe’s and Habitat’s goal is to help 1,000 families have safe, stable homes by the holidays and Shelby’s house is one of them. 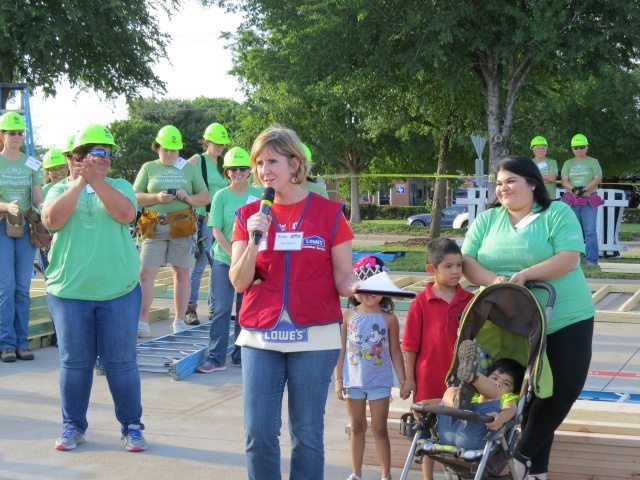 I’ll be checking in with Shelby at the end of the summer to see how her house is progressing.  I know it will be farther along by then than my own home will be…but I’ve only got myself working on this house.  Shelby’s has like 150 people helping build her house!  The goal is for her to move into her house by December.  I’ll be happy if I can move into my studio by then.  The race is on Shelby!  The race is on! 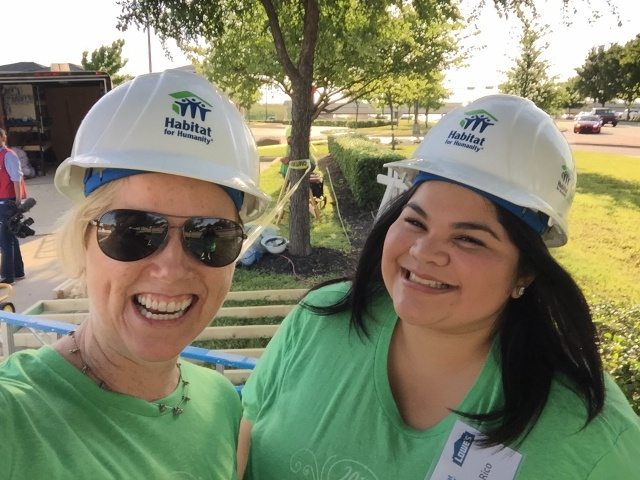 For more than two decades Lowe’s Heroes employee volunteers have donated their time to make our communities better places to live. To learn more, visit Lowes.com/SocialResponsibility and LowesInTheCommunity.tumblr.com.

For more information on Habitat for Humanity’s Women Build program and to learn about Women Build projects in communities across the U.S., visit Habitat.org/wb or the National Women Build Week tab on Facebook

A big thank you to Summer Scheideman with Trinity Habitat and to Sarah Lively with Lowe’s for taking (and sharing with me) a lot of the great pictures included in this post!