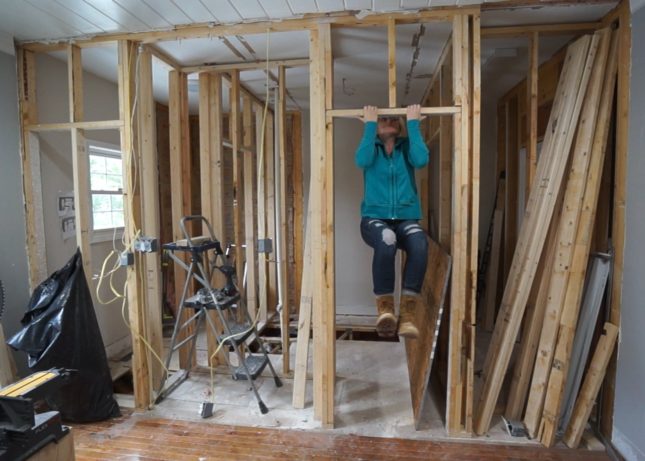 Hi all! I’ve finished most of the framing for the Jack and Jill Bathroom.   I still need to install the pocket door kit but the rest of this space is done.   It was super difficult to frame the long walls because the space is so small.  I like to frame a wall on the floor, then lift it up into place.  There’s still plumbing and electrical wires popping up through the floor and hanging down from the ceiling so I have to work around all that.  That makes it even more difficult.  I’m leaving all that in place until the appropriate “pro” comes in to do the rough-in work. 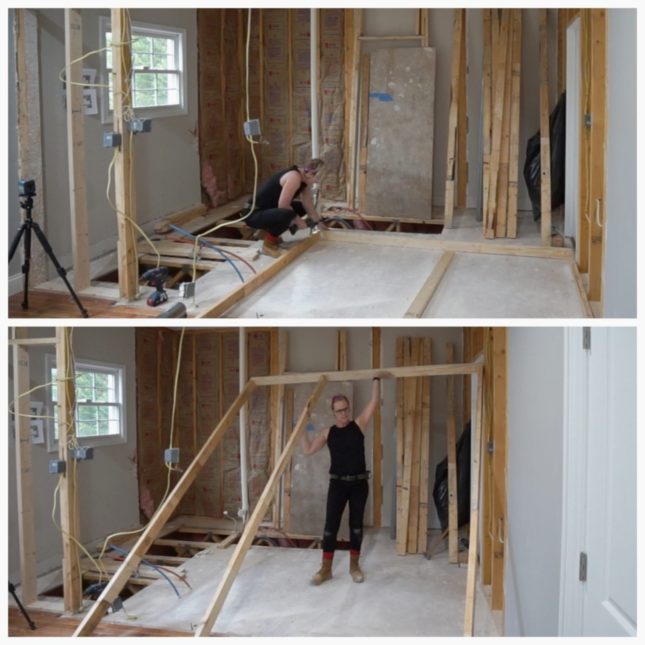 This wall will house a pocket door so there’s a large span that has no studs.   In my sketch-up plan for this room, I decided on a certain width for the new closet space.  In the real life framing phase, I went back and forth deciding if that was the right decision.  I want the wardrobes to be as wide as possible, but I want the vanity to be as long as possible.  The length/width of each effects the length/width other.  Finding the right balance was an important decision.  I hope I don’t regret it. 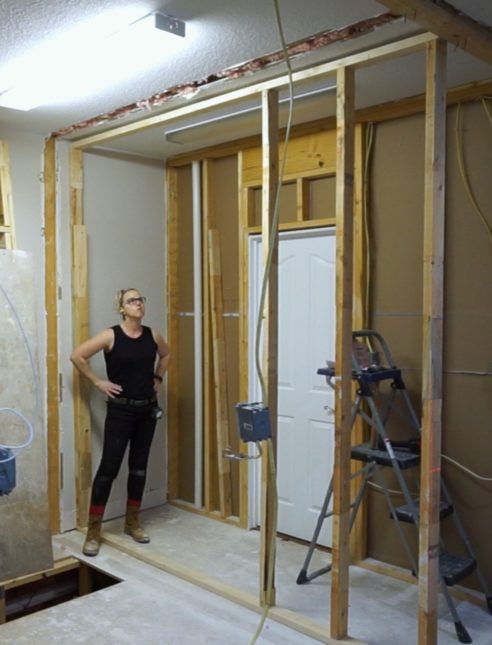 I’m trying to keep most of the insulation in the attic so I’m just removing ceiling sheetrock as needed.  Then I bag up the insulation that falls down so I can take it up at some point and redistribute it. 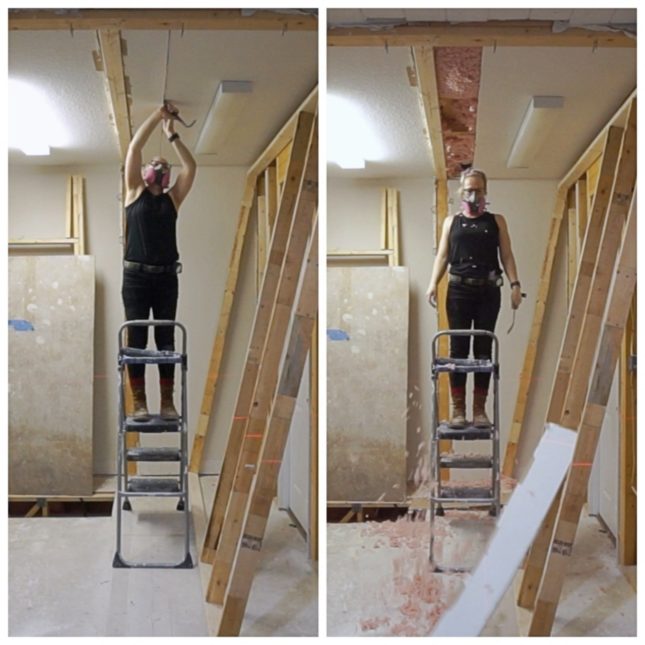 I re-used the door frame that I removed during demolition because I’m also re-using the door.  There was some chatter on my social channels about the lack of the traditional double vertical 2×4 in the framing…This wall is non load bearing so the door frame is fine. 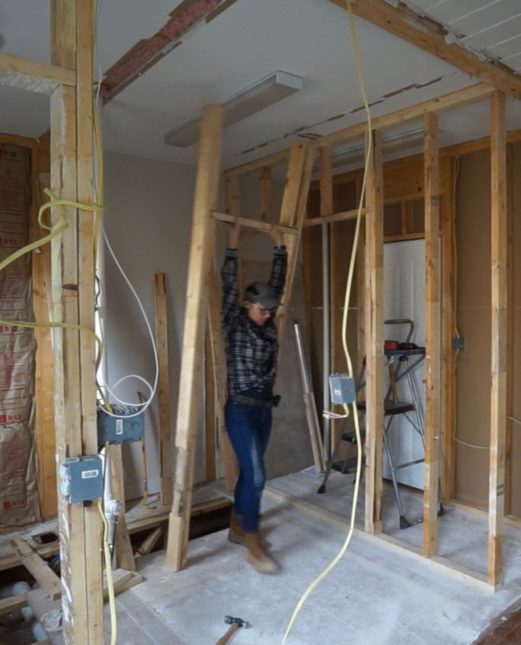 I attached a bottom plate to keep the frame square while I put it in place; leveled and plumbed it.  Then I cut the bottom plate out of the walk way. 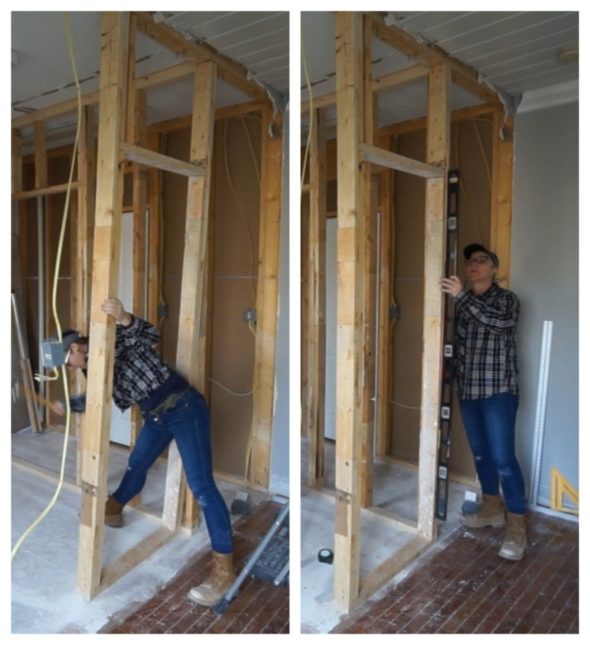 I had to cut out more flooring to move the water hoses so I could frame the second closet.  I’m cutting out flooring, centered on the floor joists so I can easily install new pieces of OSB.  In areas where the plumber needs to rough-in, I’m not securing the OSB.  The plumber can remove pieces as needed to access the plumbing, but the floor is safe to walk on without the risk of anyone falling through the basement ceiling. 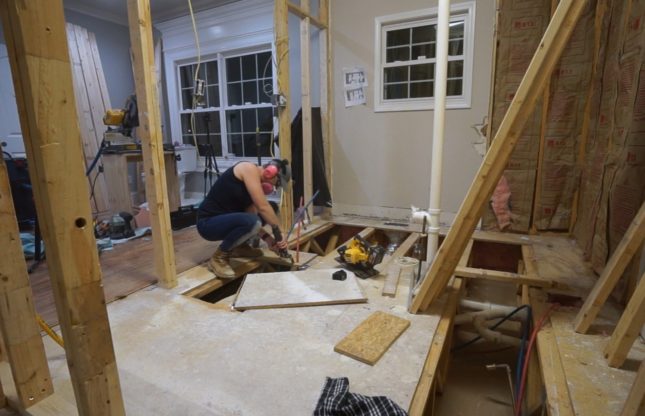 In hind sight, I should have gone into the attic, moved all the insulation out of this space and removed the ceiling sheetrock and started fresh.   But I didn’t.  I patch-worked the whole thing together. 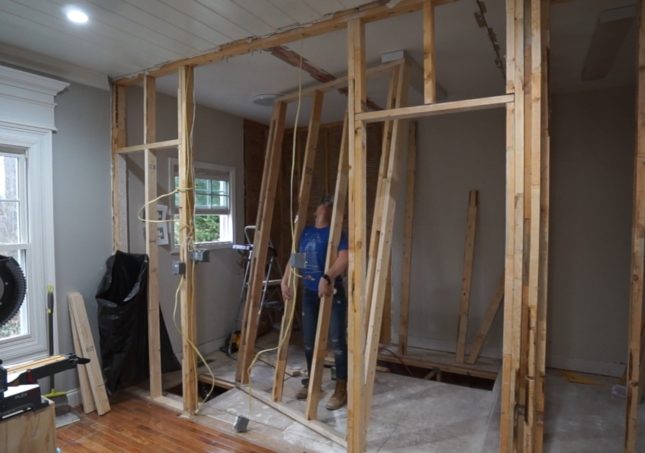 In trying to NOT do any more demo than necessary, I probably made more work for myself.  (Maybe not.  I din’t do it the other way to compare so we’ll never know.)

I installed walls, leveled and plumbed them, and then marked the ceiling where I needed to cut out. 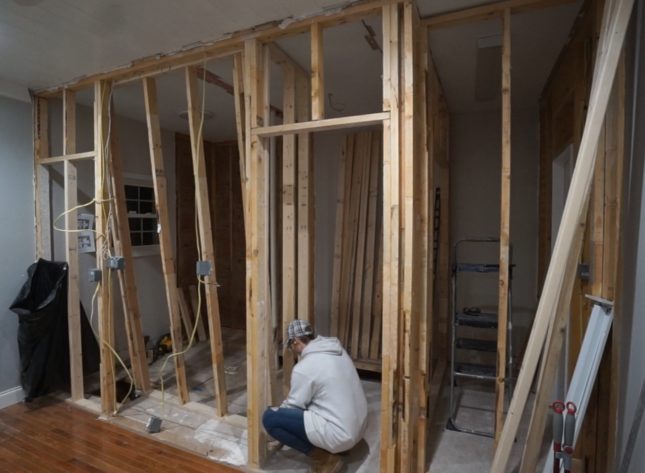 Then I cut out the ceiling, moved the wall, secured a 2×4 to the joists and then re-installed my wall. 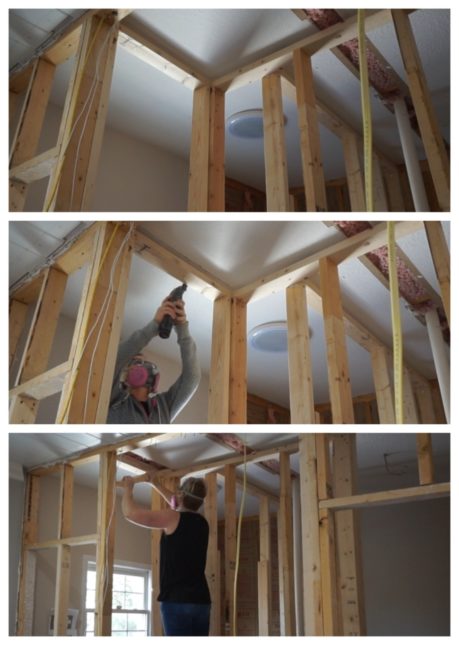 Luckily Wes was home one day when I found myself in a precarious position, holding the ceiling up and needing a second pair of hands…I could have just let the piece of drywall (and all the insulation loading it down) fall to the floor.  BUT because Wes was home there was a chance of NOT letting the drywall and insulation fall so my brain stubbornly refused to let me take the easy option.  I held up the ceiling and called (yelled) for Wes until he heard me. 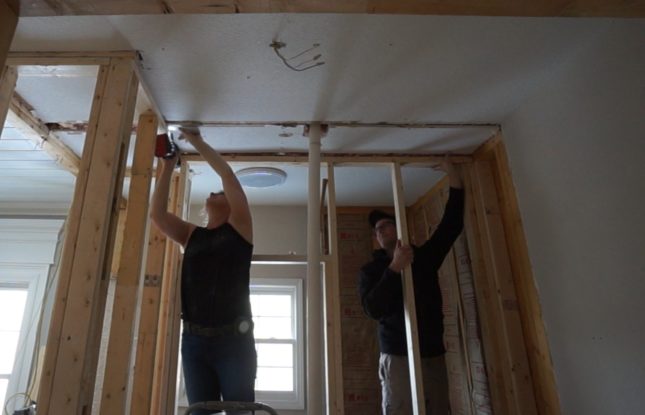 By the time he arrived to help my arms were about to fall off — and I felt it the next day too.  (Trying to wield a hammer the next day almost cost me a window.  Almost!) 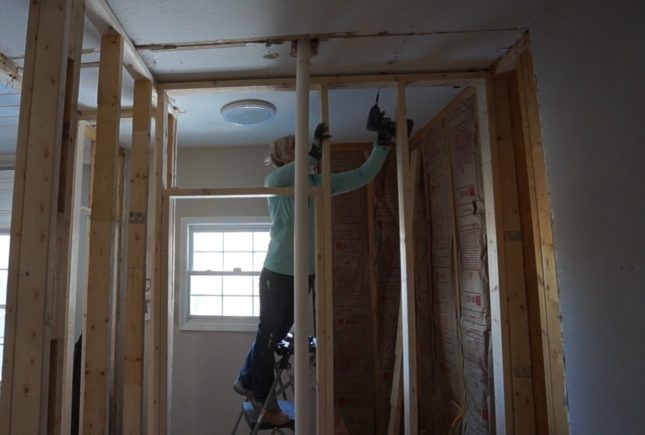 I wear earbuds and listen to music while I work so anyone in the house hears me singing and swearing intermittently. 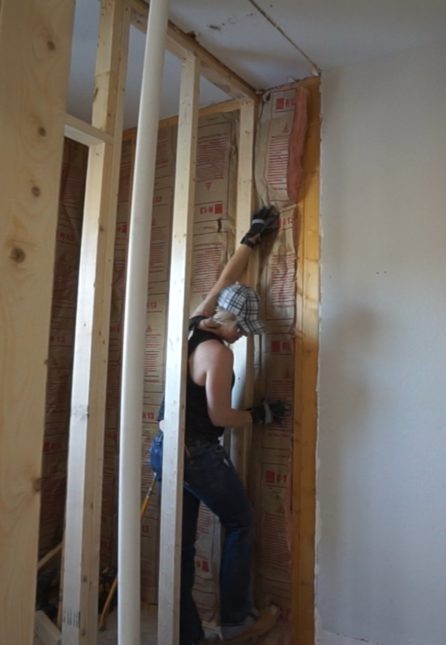 I don’t include any colorful language in my weekly update video (unless you understand German).   There is a tiny bit of singing though.  😀

That’s what I got done this week.  There are a lot of moving parts to manage through this remodel.  I’m waiting for plumbing fixtures before the rough-in can happen.  So now I’m going to work on the closet to the right because there’s no plumbing in those walls and I can move on without waiting for anyone else to do anything else before I can do my thing.