*Fair warning, this post is about Sewer Pipe Failure.  All potty talk!

This is NOT the bathroom post I wanted to be writing today but when sh*t happens, you have deal with it.  And I’m dealing with literal sh*t — in the same place for the second time in months!  For real~  All sorts of Sewer Pipe Failure issues.

A few months ago the drain pipe from the powder room toilet got clogged.  Our domestic expert had a great trick involving dumping hot water into the toilet which magically clears the plug.  It didn’t work –– though we tried many many times!  So we tried a plunger.  Wes tried the plunger and when I say, “tried”, I mean he PLUNGED!

Let me tell you what happens when you pour hot water into a toilet that is sealed with a wax ring.  Hot water softens the wax –which is not good.  If you plunge after softening the wax seal with hot water, you can very easily break the seal.  Which we did! 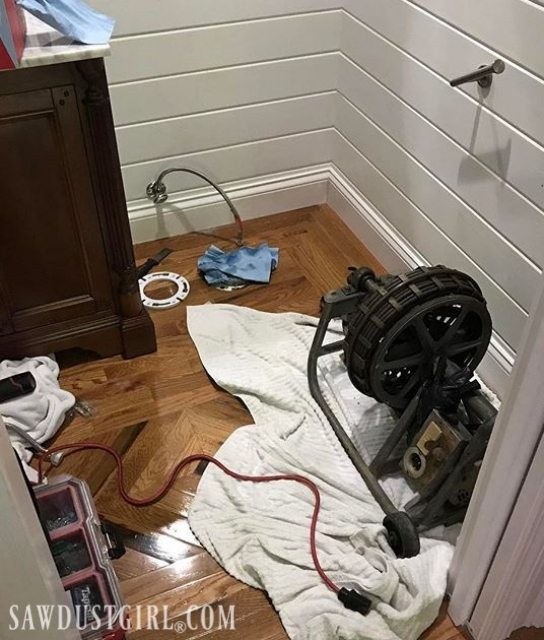 We heard drizzling below us. We ran down to the basement and found water drizzling out from the light in the bedroom closet.  That bedroom and closet happen to be where Madison is currently residing. 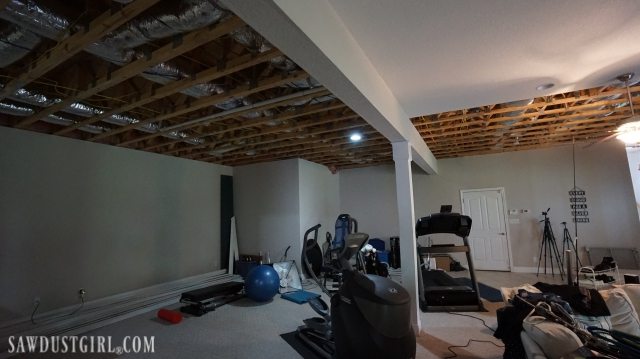 Luckily that time the water was clear (meaning not poopy) so I didn’t tear out any drywall that time.  We washed ALL Madison’s clothes.  Threw some things out.  Let it all dry out.

The drain pipe from that bathroom has a really long run before it exits the house and there was a lot of paper clogging it.  I had installed a dual flush toilet when I remodeled the powder room years ago.  My plumber let me know how those toilets create problems because even if you’re just flushing water and toilet paper, you need enough force to push the toilet paper through and out of the pipe.  #1 flush just clears the toilet.  It doesn’t push the paper through the pipe.  Or at least in our case, where there is a LONG run of pipe.

So I bought a basic, single flush toilet.  The plumber had to pull the old one out to clear the drain and replace the wax seal anyway. 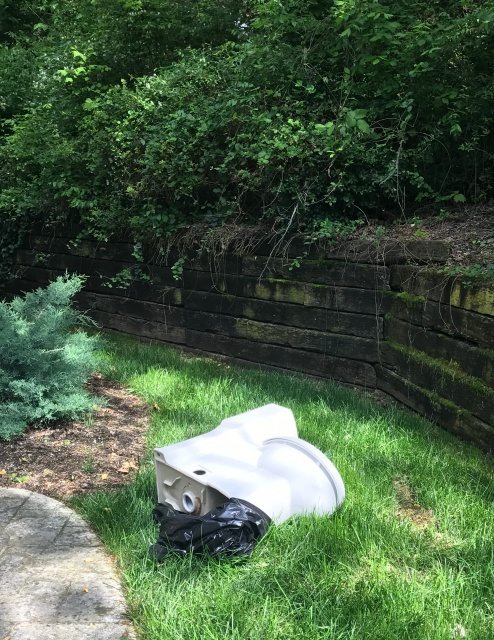 So, new basic, single flush toilet installed.  People in the house are educated about making sure not to FILL the toilet with tissue paper from blowing noses and NOT TO PLUNGE … and life goes on.

And then it happened again.  And “WE” couldn’t just leave it alone and call the plumber.  Even though we KNEW not to plunge with a pushing action (only pull plunge which takes a weird plunger that is very difficult to use).  “WE” plunged the he!! out of that clog and this time there must have been a sh*tton of water in that pipe because the seal (or something) broke and a TON of sh*twater rained down on the closet below.  It was stinky, gross and discouraging.  This happened Wednesday night.  I was not happy about the situation and refused to deal with it that night.  I sat down on the couch with a BIG bowl of ice cream and watched Dr. Who with Madison.

Yesterday I woke up excited about installing drawers and doors in the Jack and Jill bathroom and FINISHING that space.  Then I remembered that I had to tear out the sewer waterlogged drywall in that closet.

So that’s what Madison and I did yesterday.  All day.  We did a facebook live and I tried some parkour on the wire shelving.  (Warning:  There is a little cussing.)

The entire ceiling was soggy and a portion of one wall had wet face paper. 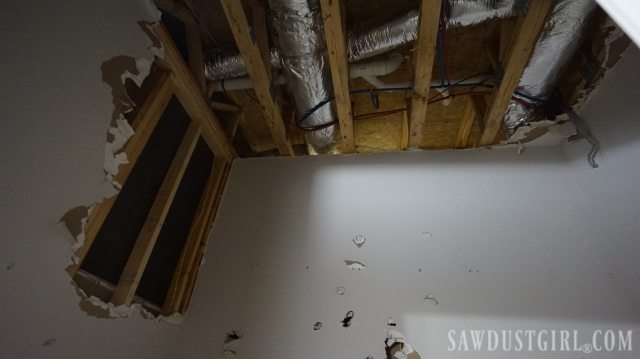 I pulled out all soggy carpet too. 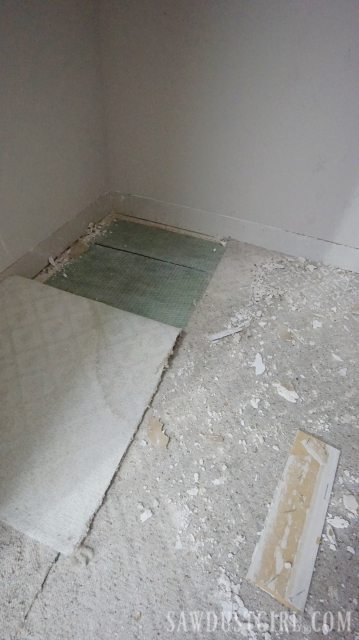 Is this the weirdest carpet pad?  Some kind of rubber pad.  I suppose it’s supposed to be a moisture barrier to protect the carpet from the moisture in the concrete.  ??

My face sums up how I feel about pulling up carpet strips. 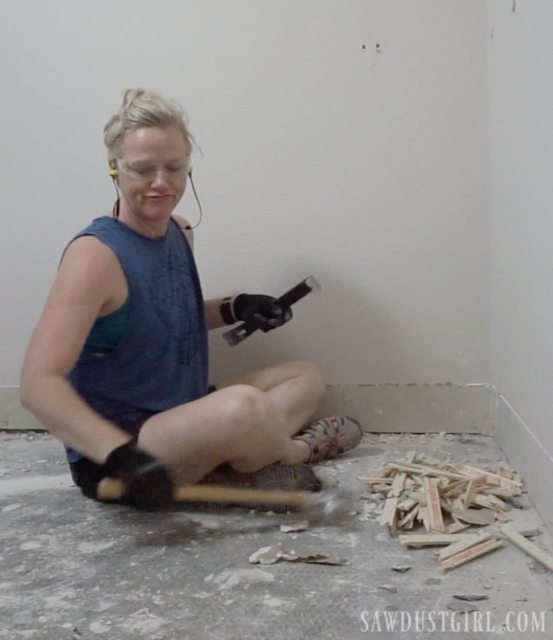 I exposed just a small portion of that drain pipe by pulling out the ceiling drywall.  The plumber is coming out today with a camera to scope the whole run of drain pipe and see if there is something funky going on.   We already suspected that there wasn’t enough slope in the long run.  I don’t know how we (HE) is going to fix this issue.  All I know is: this can NEVER happen again.  EVER. 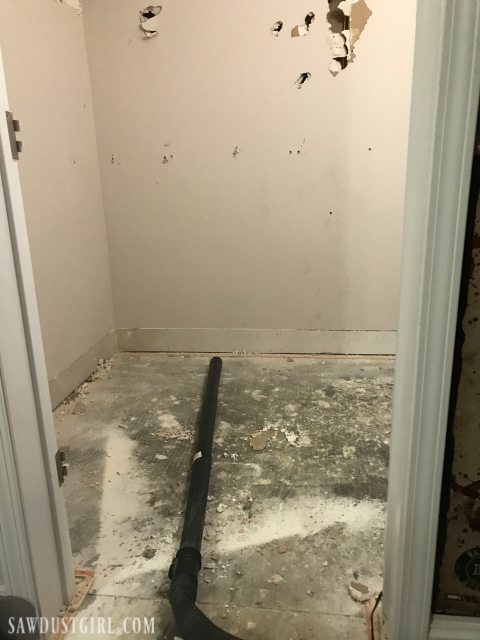 Madison will be doing laundry for days. 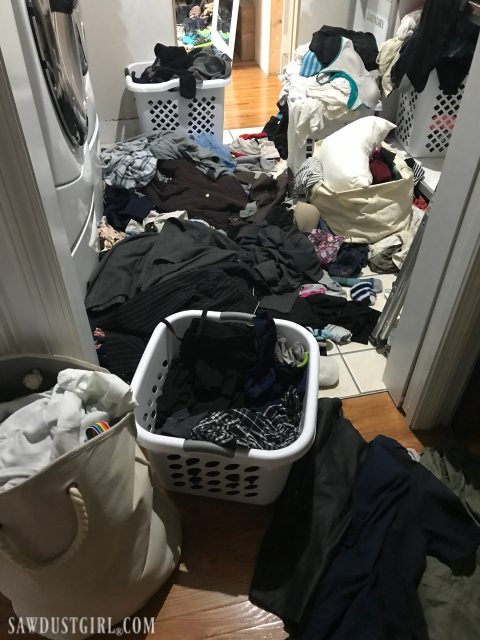 I’m going to hire someone to come install all the drywall on the basement ceiling so we’ll just include this closet too.   Depending on what the plumber decides will be a permanent solution I may have to do more demo to access the whole drain pipe.  That’s just me fearing a bad-case scenario.  I won’t say “worse-case” because I don’t want to jinx myself.   These issues that arise are just part of home ownership and we have to deal with them.  I’m hoping to deal with this one quickly and get back upstairs to finish the jack and jill bathroom — which by the way can’t be used right now either because it’s on the same drain line.  We’ll figure it out.  There’s nothing else to do!  LOL 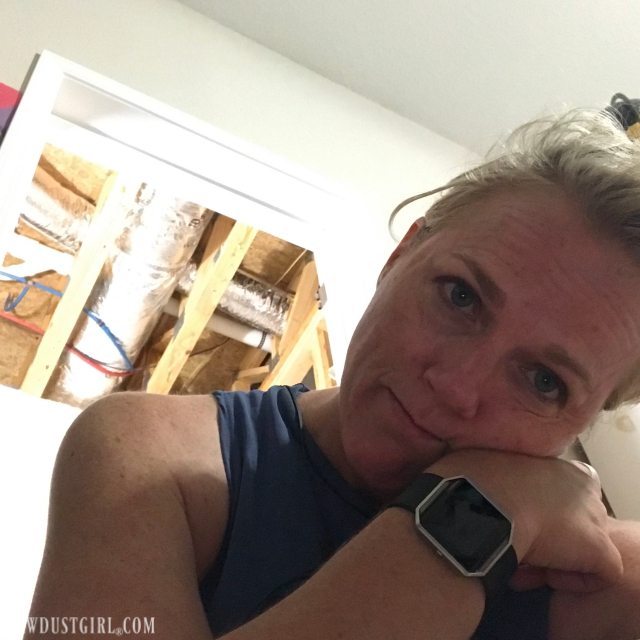 What I can say is Sewer Pipe Failure sucks!