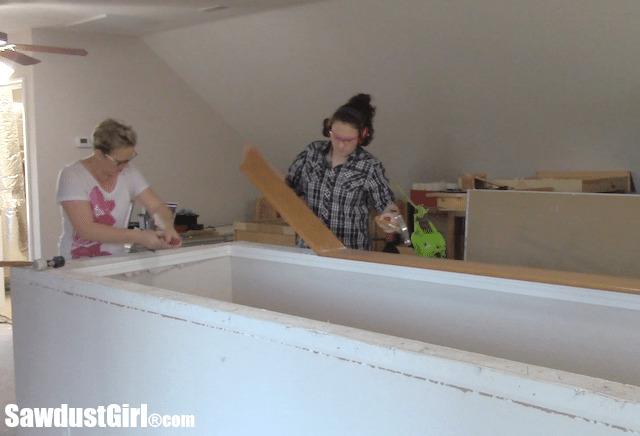 Madison helped me do some work in the loft this week.  She rather enjoys tearing things up so she was on board to help me with a little demolition.  This loft is quite a large space at 1320 square feet.  It’s just a big, blank canvas that I literally get to do whatever I dream up.  I spent a couple weeks dreaming up a plan for my craft room/studio/office in the space that existed behind the closet and “recording studio”.  I mean, I literally just framed, added lights and additional receptacles, taped and mudded, primed and painted, installed brick paneling and floors, why would I consider undoing all that work? 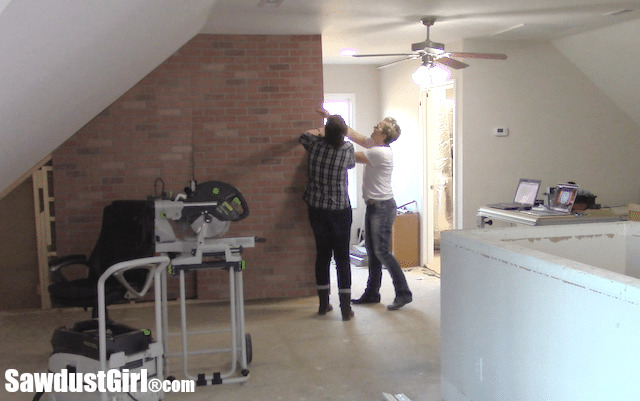 Well, as it turns out, the plan that became the most exciting was the one that involved tearing out the recording studio!  We already decided that room would not see the light of day as a recording studio more than a few days a year so I wasn’t going to finish it off as a “recording studio”.  Instead, I was planning on using it as a storage closet…because it was there and “closet” made it being there make sense.  So this room had now become the boss of my design plan, preventing me from creating a truly AMAZING studio simply because “it was there”.  And that is no kind of good reason to let anything be the boss of my design plan.

So after mulling it around for a few days, the recording studio is out.  Gone.  Kaput. 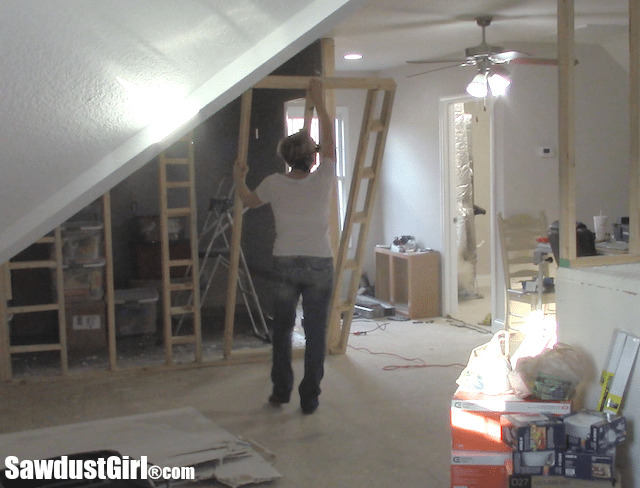 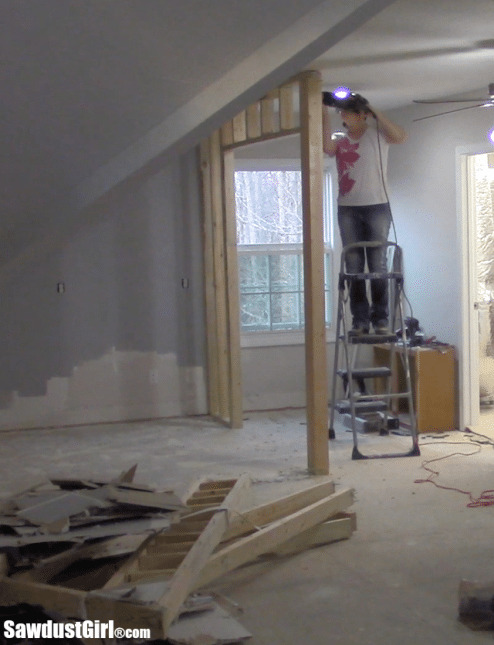 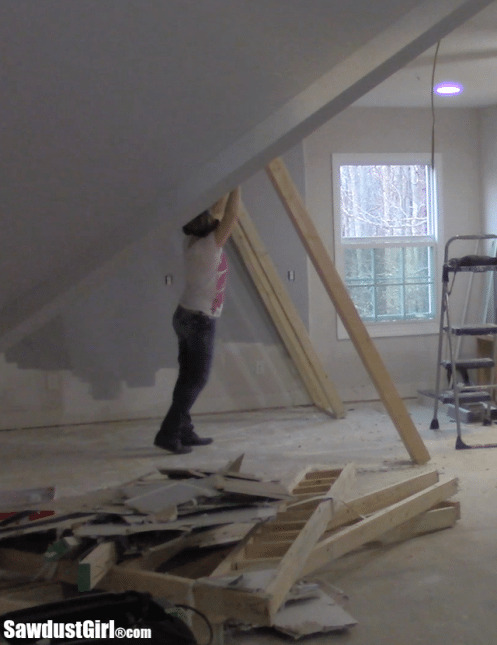 I don’t know what it is with me and this house but this is the second project that I built — that I’ve torn out!  It’s often tempting to give in to the dread of the extra work it would take to tear something out, regardless of who did the work building that something up in the first place.  I’ve compromised on what I really wanted to do in a space for this reason a few times in the past homes.  In past homes, I never planned on staying there longer than a few years so it was easier to compromise.  Wes and I have come to think that we will keep this house long term so I take that into account when I’m weighing the “work to benefit” balance.  Benefit is probably always going to win. 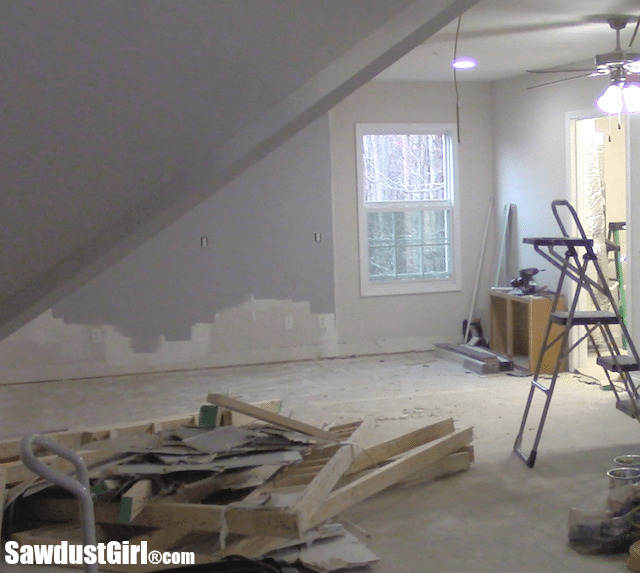 With that closet gone, the extra space opened up a whole new world of opportunity for my studio.  There is going to be a TON of organized storage cabinets on the perimeter walls making as much use of those funky angles as possible without creating an opportunity for me to knock my head on the ceiling every day.  There will be quite a few desk stations for sewing and crafting and I’m planning out 2 separate islands. 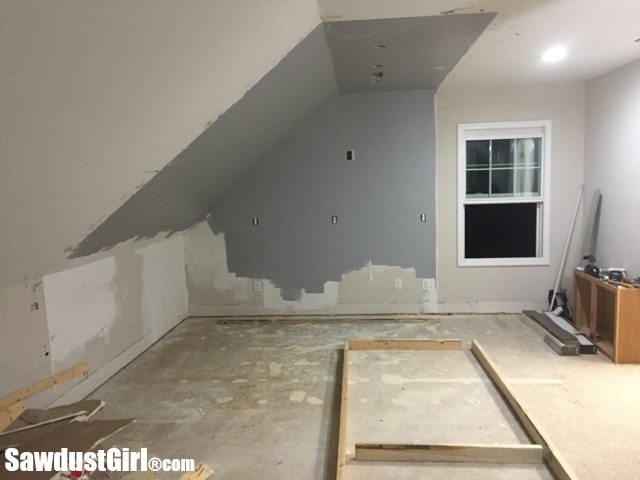 My studio will take of half of the loft.  The other half will be a library/den.  Currently, there is a short wall enclosing the stairway.  I’m extending up to the ceiling in strategic places to create functionality in my new studio and to serve as path for electrical wiring to get to new places.

I was trying to build my studio half first, while storing all my craft items in bins over in the library side.  I wanted to avoid hauling everything downstairs, and then hauling it back up when the loft is finished.   I don’t think that plan is going to work though.  It’s too difficult to visualize where the eventual new wall and door to the bathroom will be so I can plan the lighting and cabinets, etc.  So I think my next project is getting everything cleared out of the entire loft.  We have a big guest bedroom in the basement that isn’t being used. 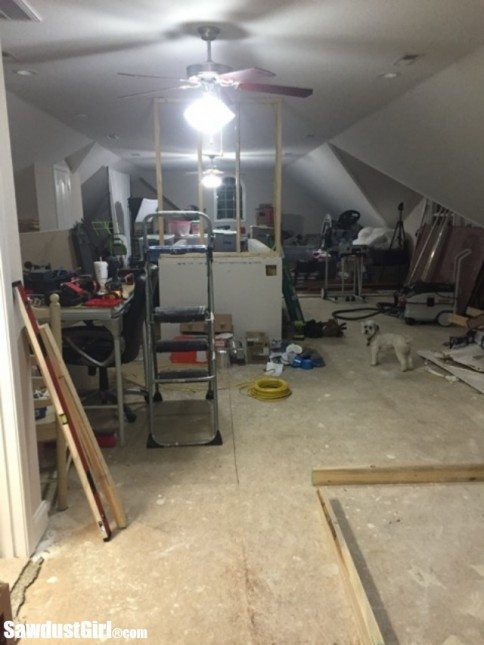 That’s a LOT of stairs but Wes and Madison can handle it!  LOL  I’m going to delegate clearing out the other side to them while I start building over here.  It’s pretty exciting! 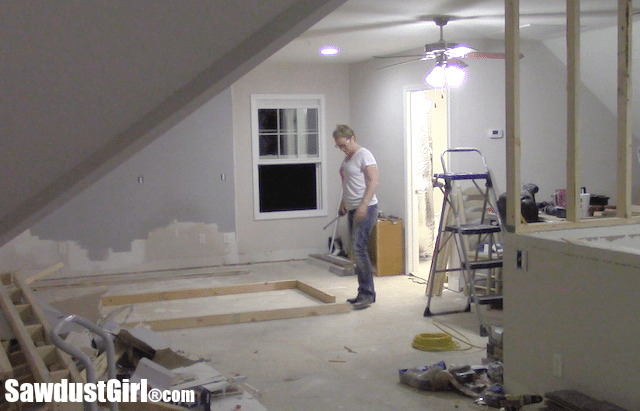