I created a faux brick and plaster feature wall in my craft room.  I used inexpensive brick veneer wall panels from the Home Depot and then zhushed them to make them look fancy!  The whole idea came about because I wanted to reuse the materials I tore out of the un-realized recording studio which included a few sheets of brick paneling.  I wanted to use the material but wanted to make it look more like real brick. Specifically like a really old brick wall that had been plastered and painted repeatedly over a few decades. 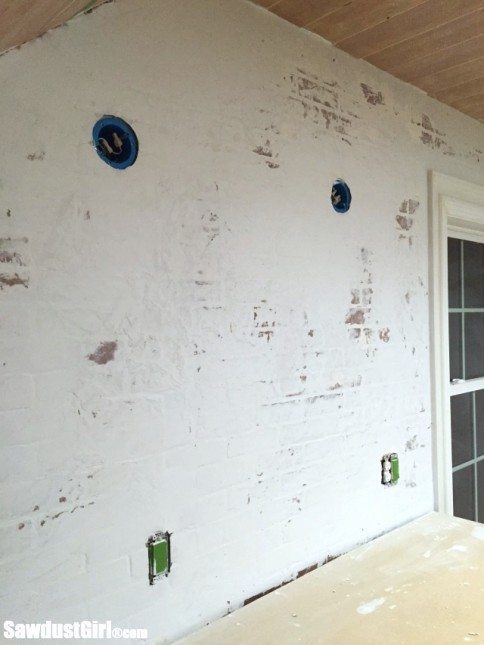 Use Brick Panels create a Brick and Plaster look

I cut the first sheet of faux paneling and put it in place.  I had to cut out a couple outlets and a light box and those holes came out perfect on the first try. 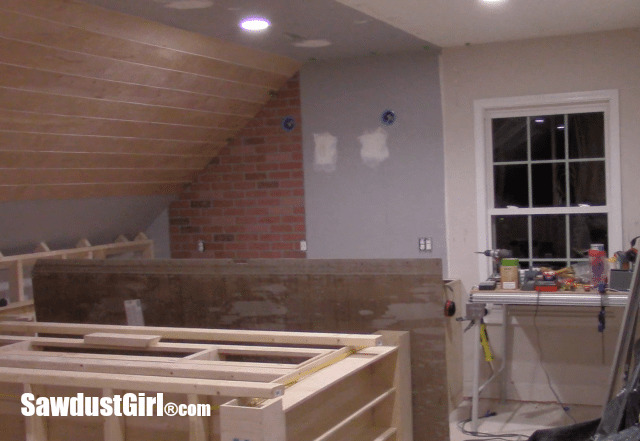 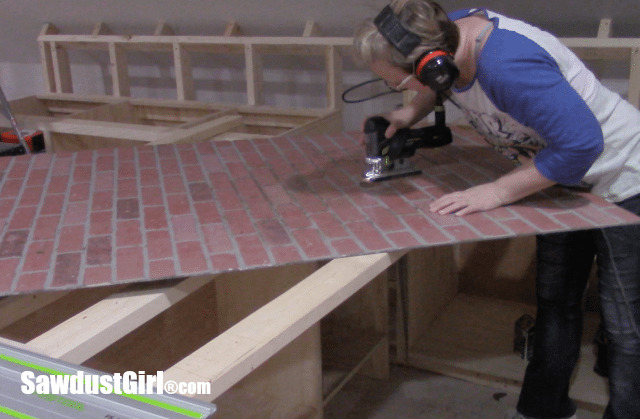 Which is more than can be said for the second piece.  I cut the holes too high and rather than start over with a new sheet of paneling, I cut out a patchwork or bricks around the light and receptacle…and while I had the jigsaw in my hand, I cut out all the half bricks on the end of the panel.   I knew the seams would hide better this way after plastering but I got lazy on the first section and didn’t do it.  Because I had to recut the light and receptacle holes on this one I went ahead and got fully committed.  All in. 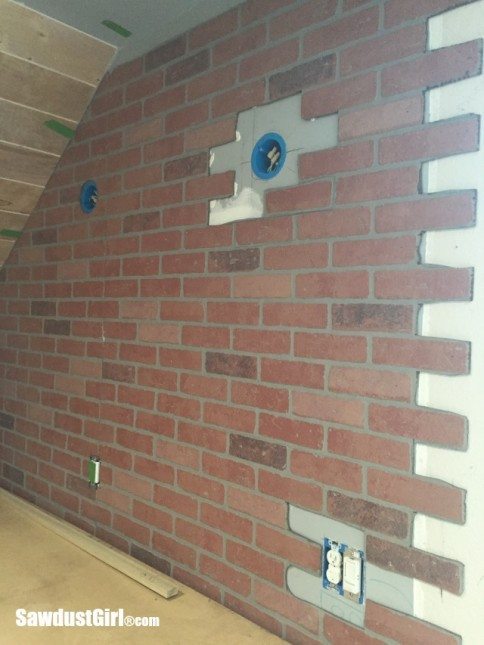 This is the seam where the two panels meet without weaving the bricks.  It’s a very blunt edge and even if you line the bricks up perfectly, the seam is quite visible. 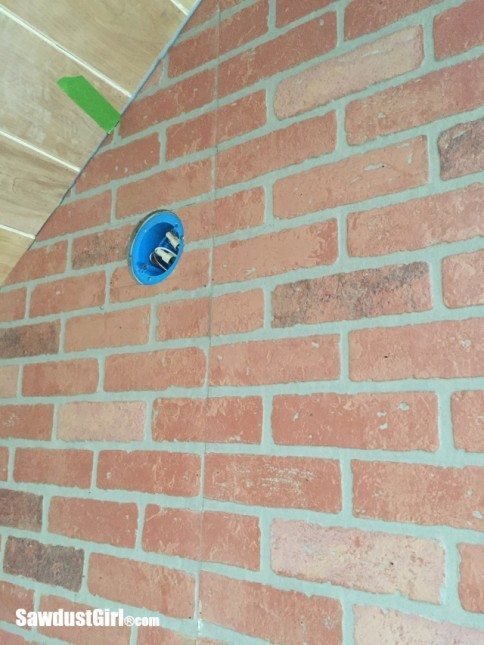 More so depending on your angle!  I would have taken the first panel down and weaved the bricks on this joint too but I’d used construction adhesive on the edge and just figured I’d make all the other seams perfect and spend more time hiding this one with the plaster. 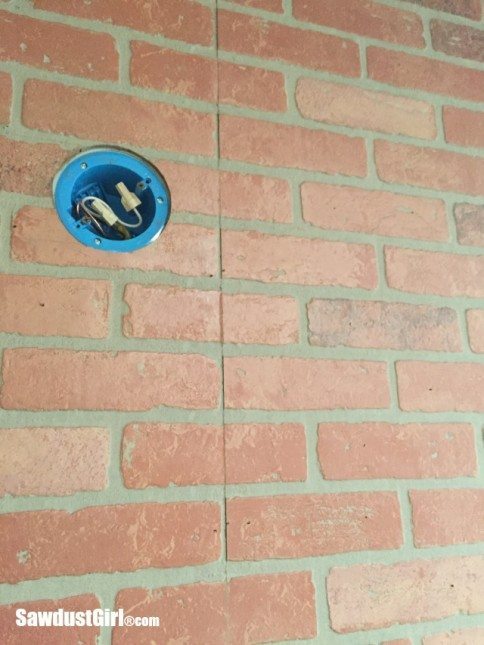 To cut away the half bricks, I cut on the grout line and then broke the unwanted bricks out.  Breaking it, as apposed to cutting it, created a jagged edge which looks more realistic (in an old brick sort of way). 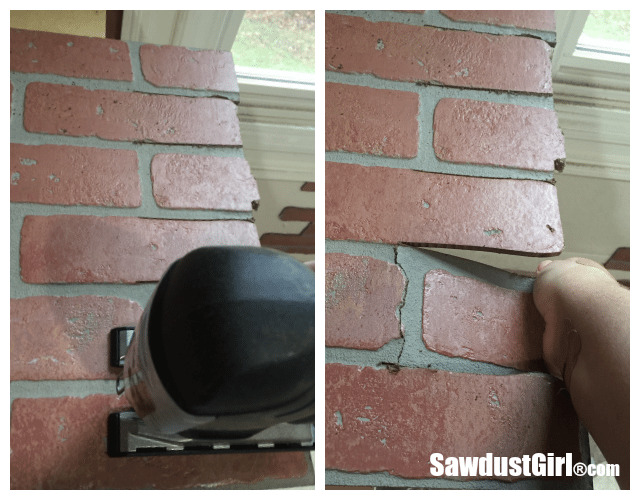 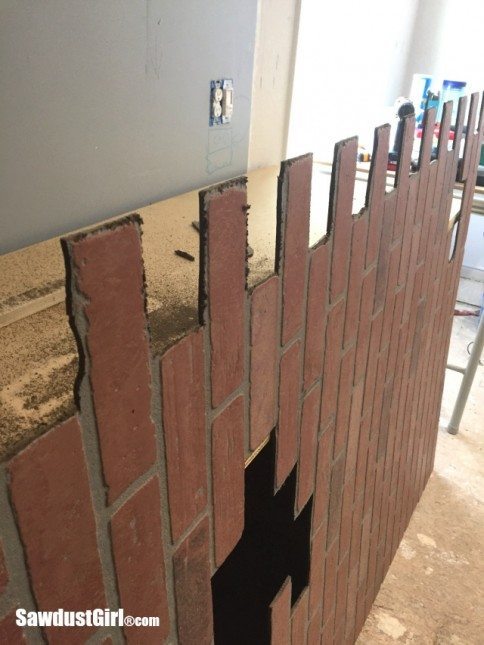 I applied construction adhesive around the holes and on all the protruding bricks on the seam line and then went ahead and dotted the entire back of the panel because at this point– I’m never taking this brick wall down anyway so why not make good and sure it never budges! 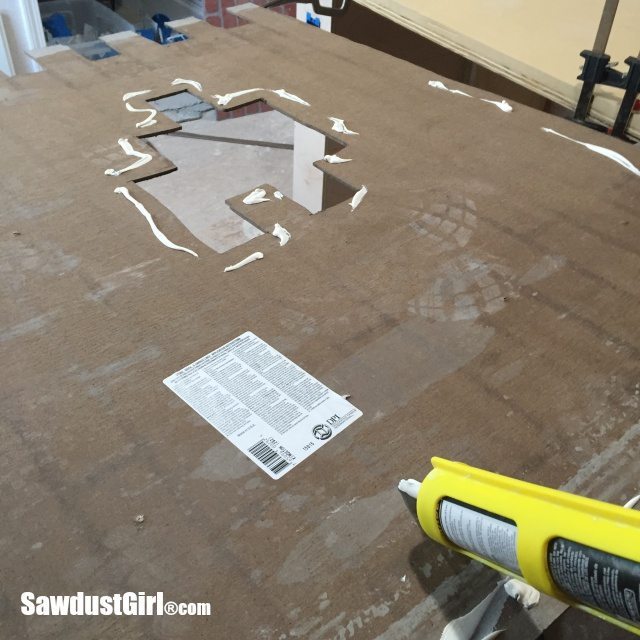 Next I cut a WHOLE BUNCH of single bricks and glued them in where they needed to be. 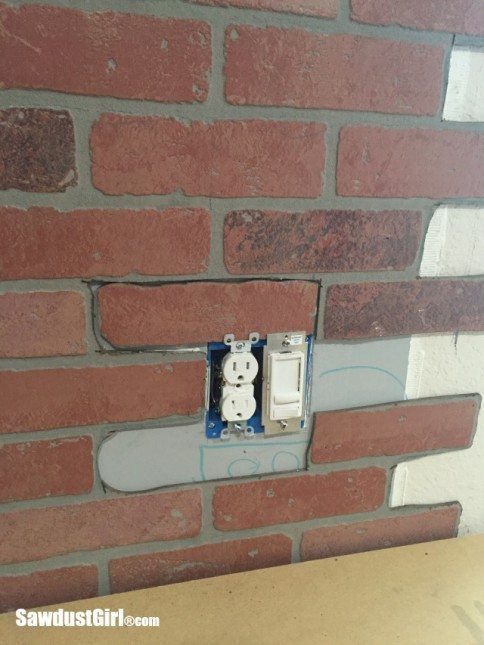 It was a LOT easier to get the hole locations perfect when I was able to cut each brick one by one.  Ultimately I should have pulled that light box forward and reinstalled it on top of the brick but I ignored that thought and just made sure my light will cover the hole I did create.  I don’t generally go the “quick and dirty” route but once in a while… 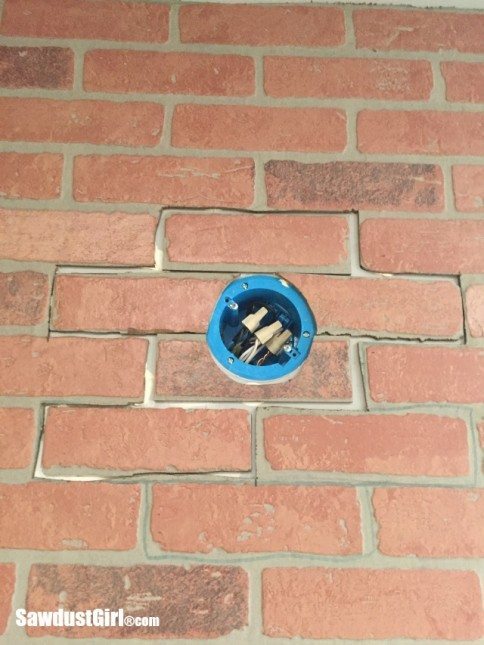 U used joint compound to fill in the voids and hide my seams. 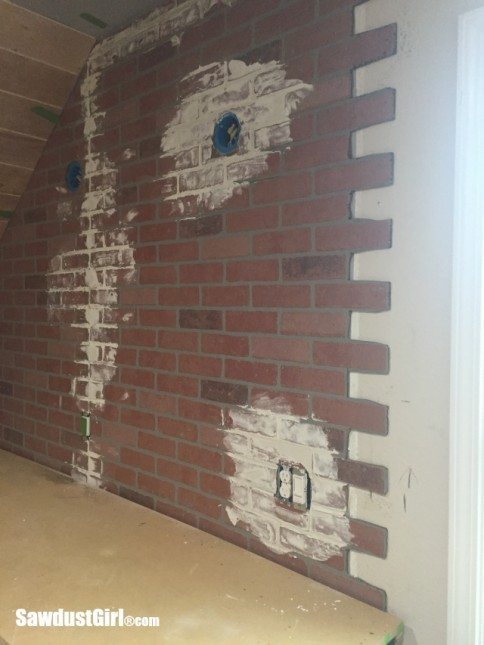 I had to take a break from the “brick work” to bulk out my window trim since the brick wall will but right up to the moulding. 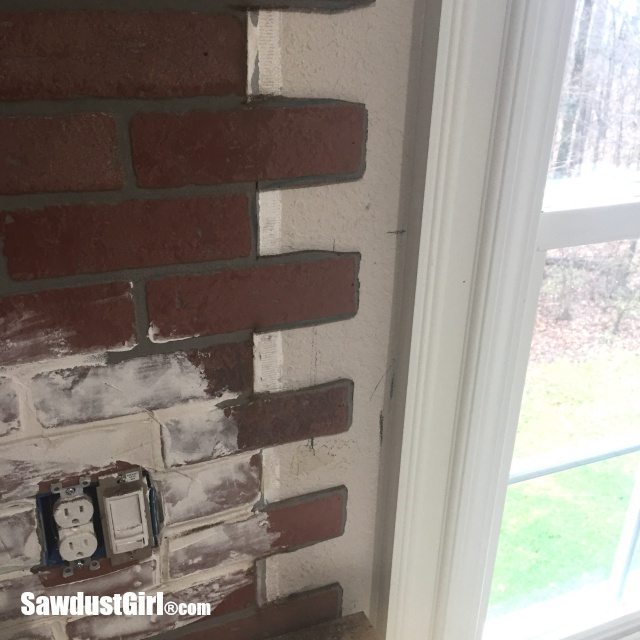 Once I added the additional moulding pieces, I finished up my brick wall using the same “weaving” method.  It was a lot of stinking work.  I probably could have applied a brick tile on the whole wall in the time it took me to do the paneling but the paneling was a whole lot cheaper.  I used about 3 sheets. 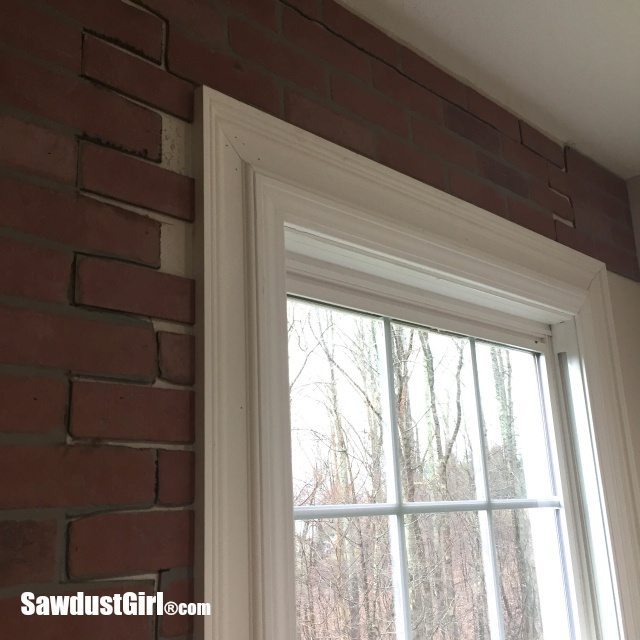 Once I finished the whole wall, I concentrated my efforts on hiding the seams and creating the plaster look.  The weaved seams basically disappeared once filled with joint compound. 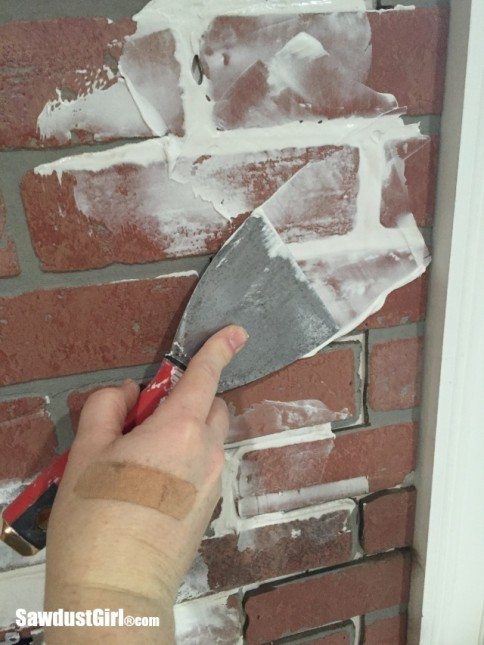 I had to build it up since the voids were so deep.  I smooshed it into the seams, let it dry and then came back and applied a little more where needed. 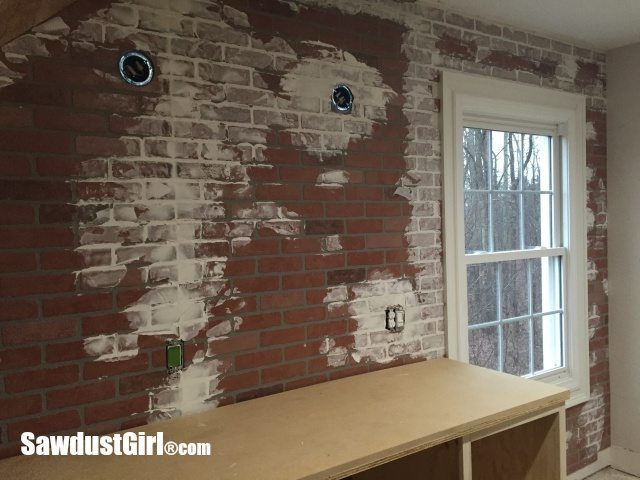 After the seams were dry I started troweling joint compound over the whole wall to create the “plaster look”. 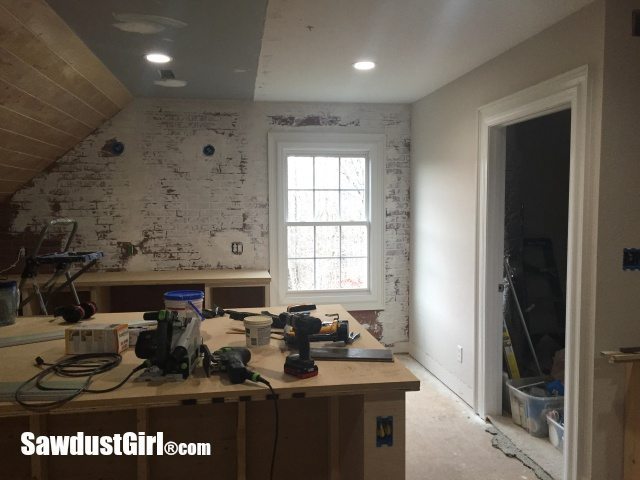 I did this in stages.  I applied some plaster, let it dry and then went back in and applied some more.  This part is the artistic part where you just get the wall to look however you want. 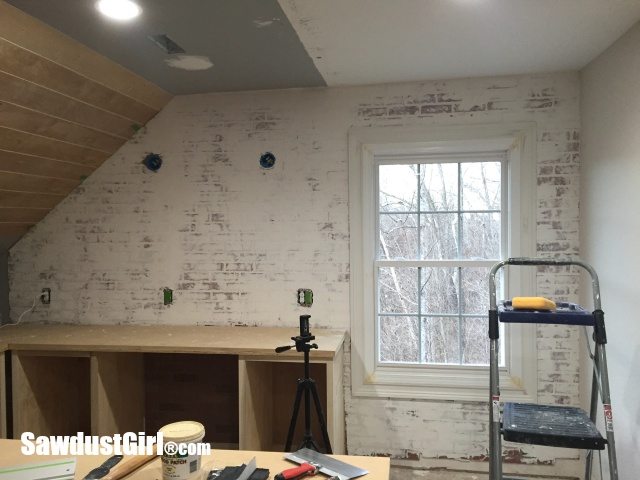 I applied plaster, then sanded and sponged some away, then came back in and applied some more purposely creating some texture.  I messed with this wall A LOT. 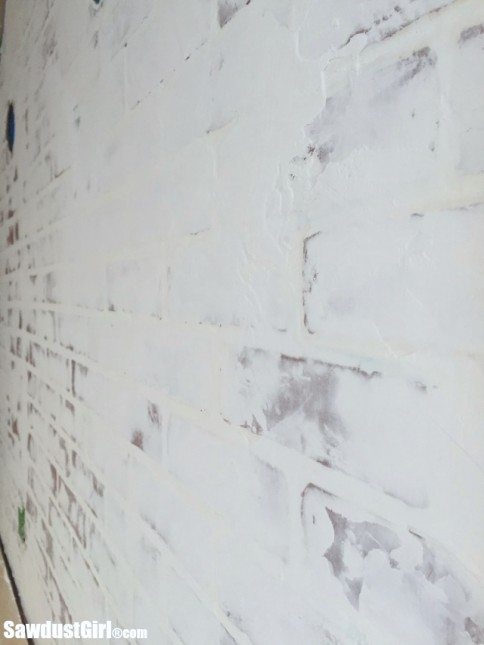 Then I painted it.  Actually it’s just primer because the primer will seal the plaster but it has a really dull, chalky look and will grey over time which is perfectly perfect for the look I’m going for. 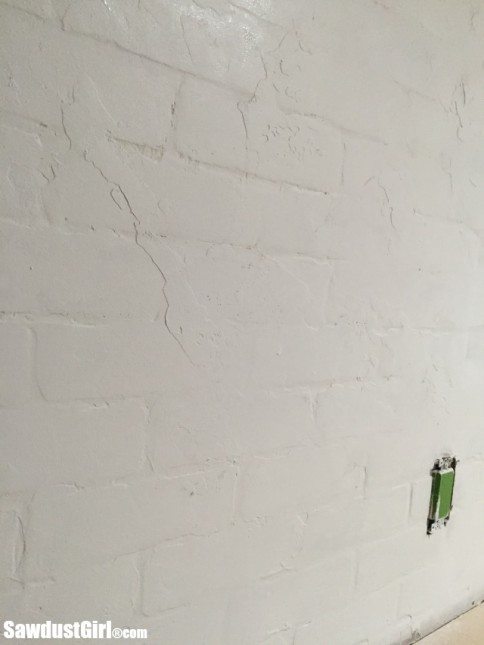 After applying priming, I let the primer dry for less than an hour and went back in with a little trowel and scrapped some of the paint back off.  Another layer of the aging process I was going for.  I scraped away just enough to expose some of the brick and plaster underneath.  It looks like the paint is flaking off.

The moisture in the primer dampened the joint compound so the timing on this part is somewhat critical.  I don’t think you’d get the same result if you waited too long. 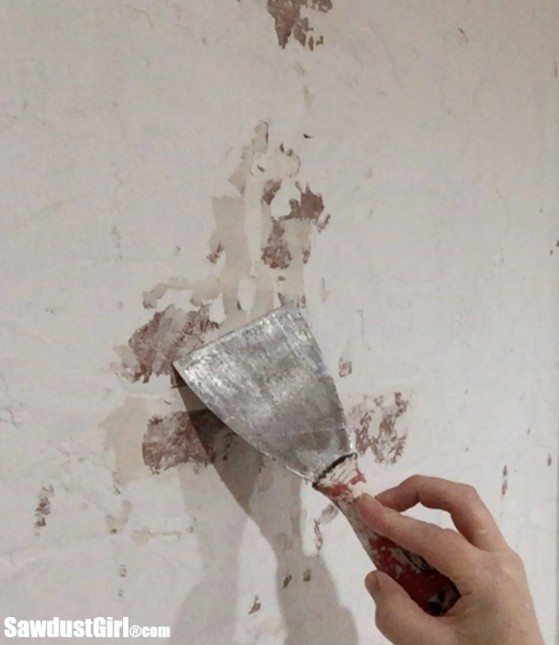 Now I’ve exposed some of the joint compound again so I need to go back and wash the whole wall with a transparent glaze or something that will seal the wall.   I took way more time than I expected it would to create a faux brick and plaster look, but it’s my feature wall so I had to keep messing with it until it looked right.  Next I’ll focus on finishing my ceiling.